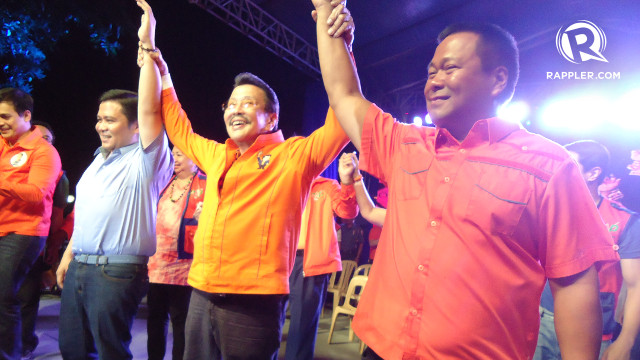 MANILA, Philippines - When former President Joseph Estrada was asked what his wish would be on his 76th birthday, he gave an answer everyone might have expected: to win the mayoral race in Manila in May.

"Ito na po marahil ang mga huling taon ng aking paglilingkod, ng aking buhay. Ito'y aking inaalay sa lungsod na aking sinilangan (These may be the last years of my service, of my life. I want to offer these to the city where I was born)," he said.

But during the program of his birthday celebration on Friday, April 19, at Plaza Morga, Moriones, Tondo, Estrada's smiles were evident when his two sons, Sen Jinggoy Estrada and senatorial candidate JV Ejercito, graced the event.

Jinggoy is Estrada’s son with his wife, doctor and former Sen. Luisa “Loi” Estrada, while JV is the son of former actress and San Juan Mayor Guia Gomez.

The last time the half-brothers shared the same stage was during their father's proclamation rally on March 31. Jinggoy was quoted as saying he only came to support his father, alluding to his rift with JV. The senator has told in media interviews that he felt JV was bringing into light their uncomfortable relationship to publicize his bid for a Senate seat. 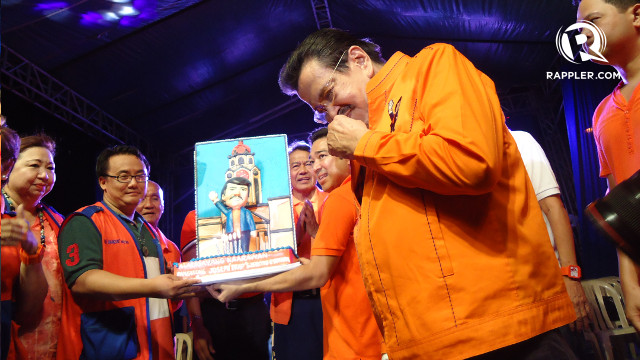 JV, who came a few minutes late in the program, took out his smartphone and captured photos of the cheering crowd. His father, without his microphone on, approached him and asked, "O, gusto mo bang magsalita (Do you want to speak before the crowd)?" Ejercito only replied with a smile.

This writer then saw the former president grab JV's right hand, without hesitation. He then approached Jinggoy on the other side of the stage and grabbed his other son's hand, to the surprise of the senator.

The former president brought them at the center of the stage and raised their hands. As cameras flashed, the crowd went wild.

After the older Estrada blew the candles on his birthday cake, both sons took off -- JV exited on the right side of the stage while Jinggoy went to the left side. 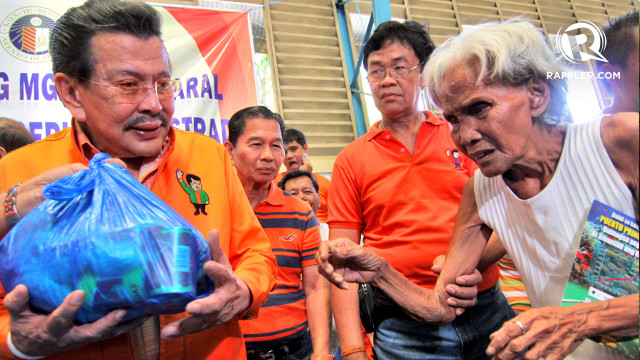 The former president's birthday did not shield him from criticisms relating to the upcoming local polls. Estrada denied that he committed an electoral violation when he gave gifts in Baseco. He said the donations came from his former classmates at the Ateneo High School.

Estrada also thanked his rival in the local polls Mayor Alfredo Lim for wishing him a long and healthy life on his birthday. "Ako'y nagpapasalamat na ganyan ang kanyang panalangin para sa akin. Ganoon din ang panalangin ko para sa kanya. (I would like to thank him that that was his prayer for me. I also wish him the same)," he said. - Rappler.com