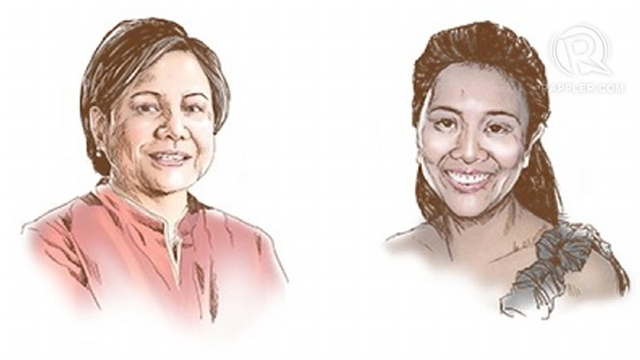 MANILA, Philippines (2nd UPDATE) – A month before the May 13 polls, Vice President Jejomar Binay’s daughter, Nancy, and former Las Piñas Rep Cynthia Villar broke into the top 3 despite being first-timers in the senatorial race.

A Social Weather Stations (SWS) survey conducted from April 13 to 15 showed the two tied at rank 3-4. Both gained two percentage points from a rating of 47 and went up from 5th-7th place in the March survey.

A candidate of the opposition United Nationalist Alliance (UNA), Nancy Binay is a political neophyte. Villar of administration slate Team PNoy is running for senator as her husband Sen Manny Villar ends his term. 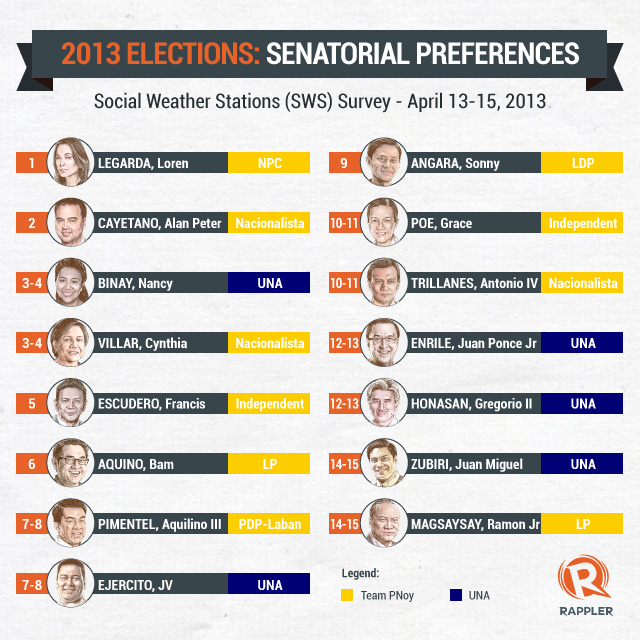 The survey was released by SWS through its media partner, Business World, on Sunday evening, April 21. It shows 9 candidates from Team PNoy and 3 from UNA possiby winning in the elections.

In a statement, Nancy Binay welcomed the survey results.

“I am grateful for the support. It inspires me to work harder to reach more people and discuss with them directly what I plan to do if elected. At the end of the day, surveys are there to guide us. The final word will come from the people themselves on May 13,” she said.

Binay has said she prefers to campaign on the ground instead of joining debates.

Re-electionist Sen Francis Escudero further dropped in the survey, sliding down from rank 3-4 in the March survey to the 5th spot. The administration bet’s score though dropped by just one percentage point (from 48 to 47).

Among those who registered the biggest drop in their numbers is San Juan Rep JV Ejercito, who was tied with Escudero at rank 3-4 last month. Ejercito’s numbers dropped 5 percentage points (from 48 to 43), causing him to fall to rank 7-8. He is tied with Sen Aquilino “Koko” Pimentel III.

Ejercito said, “I am still thankful that I am still in the winning circle in the latest SWS-BW survey. This survey period was when my political ads went off the air because of financial reasons. Still lucky to be in the magic 12 in spite of the problems we in the opposition encounter.”

Like Ejercito, re-electionist Senate Minority Leader Alan Peter Cayetano’s numbers also plunged 5 percentage points (from 57 to 52) but he remained on the 2nd spot.

Sen Antonio Trillanes IV of the administration ticket also saw his numbers decrease by 5 percentage points (from 44 to 39). From rank 8, he slid to 10th-11th.

Of those in the top 12, UNA’s Sen Gregorio Honasan II posted the biggest loss, dropping 6 percentage points (from 43 to 37) and falling to rank 12th-13th from 9th place.

Team PNoy’s Aurora Rep Juan Edgardo “Sonny” Angara is the biggest gainer, climbing 3 percentage points (from 39 to 42). He is now at 9th place from the 12th spot in April.

SWS said the top 9 – composed of 7 Team PNoy and two UNA bets – are “safe” while 3 candidates each from the two slates battle it out for the last 3 seats.

The pollster said the outcome ranges from 10-2 to 7-5 in favor of Team PNoy.

The survey used face-to-face interviews with 1,800 respondents: 300 each in Metro Manila, North/Central Luzon and South Luzon, 400 in Visayas, and 500 in Mindanao.

The sampling error margins were +/-2% for national percentages, +/-6 for Metro Manila, North/Central Luzon and Southern Luzon, +/-5 for Visayas, and +/-4 for Mindanao.

Koko down, Bam up

Sen Loren Legarda maintained her hold on the number one spot, with her score unchanged at 59%.

Coming after Cayetano, Binay, Villar, and Escudero is Team PNoy’s Bam Aquino at 6th place. His numbers rose two points (from 42 to 44) and his ranking improved from 10th in March.

Fellow administration bet Pimentel though saw his numbers drop by 4 points (from 47 to 43). Pimentel shared the 7th-8th spot with Ejercito.

Together with Trillanes, Grace Poe ranked 10th-11th. Her scored went down by one point (from 40 to 39). Poe is the daughter of the late actor and presidential candidate Fernando Poe Jr.

Cagayan Rep Juan Ponce “Jack” Enrile Jr was tied with Honasan at rank 12th-13th. Enrile was steady at the score of 37.

Zubiri’s score did not move at 35 while Magsaysay dropped two percentage points (from 37 to 35).

For those statistically not in the top 12, see the list here.

The issues during and before the survey include the endorsement of the White Vote Movement of its first set of Senate bets: Villar, Trillanes, Pimentel, Ejercito, Honasan and Zambales Rep Milagros “Mitos” Magsaysay.

Lakas’ endorsement of its first batch of candidates also occurred prior to the survey. Likewise, news reports about the Wikileaks cable on Enrile’s supposed involvement in the murder of Ernest Lucas Jr also came out before the survey.

The Philippine Center for Investigative Journalism's report about Ejercito’s secret offshore account was released before the survey was conducted.

Among the headlines during that time were the proposed abolition of the Bureau of Customs, and North Korea’s threats against the US and South Korea.

The survey also occurred after the controversy surrounding Escudero and the parents of his girlfriend, actress Heart Evangelista.

UNA not reacting to SWS surveys

UNA campaign manager Navotas Rep Tobias “Toby” Tiangco has vowed not to respond to SWS surveys until the pollster addresses the opposition’s concerns.

UNA filed a complaint before the Commission on Elections, arguing that the SWS should disclose the names of its funders: distinguishing those who commissioned its surveys and those who subscribed to these. UNA has not subscribed to SWS since January.

Yet in a Comelec hearing, SWS said the law does not require pollsters to divulge who funds their surveys. – Rappler.com