Where in the world is Sonny Trillanes? 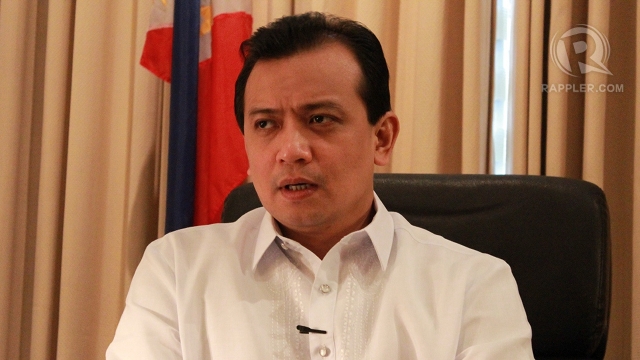 MANILA, Philippines - It is, technically, his first time campaigning.

The noticeable absence of Sen Antonio "Sonny" Trillanes IV on the Team PNoy stage is reminiscent of his first senatorial bid in 2007. The former Navy Lieutenant Senior Grade was then unseen on the campaign trail because he was serving time in prison for staging a failed coup against President Gloria Macapagal-Arroyo.

Except this time, Trillanes is very much free to campaign as a re-electionist. It's just hard to tell where he is.

Asked why he has chosen to skip most Team PNoy rallies, Trillanes told Rappler through text he has joined or sent representatives to most. Rappler's records show otherwise.

Trillanes has been represented only in a few sorties -- in Mindanao and Cebu -- by his Senate staffer Ashley Acedillo, who is at the same time campaigning for the Magdalo group for the party list.

While the coalition of President Benigno Aquino III has found difficulty gathering its bets all together during sorties, Trillanes is one of the bets who have barely appeared on stage with the President. After the proclamation rally on February 12 in Plaza Miranda, Trillanes skipped Batangas, Laguna, and Cavite, that same week. He joined rallies with the team in Iloilo the week after.

Trillanes disappeared again for a couple of weeks, skipping sorties in Misamis Oriental, Cagayan de Oro, and Bukidnon, as well as rallies in Pampanga, South Cotobato, General Santos, Davao City, and Davao del Norte. He attended his 3rd rally with the coalition in Gumaca, Quezon, with Aquino on Monday, March 13, and Bulacan the next day.

Despite describing Team PNoy rallies as "integral to my campaign," it was weeks before the Nacionalista Party candidate adopted by the President's coalition was seen with the slate again.

About 6 weeks worth of sorties in over 10 different provinces from Pangasinan to Camarines Sur missed Trillanes before he joined the slate in Las Piñas on Saturday, April 20. Las Piñas is the turf of Nacionalista head and fellow senatorial candidate Cynthia Villar.

So where in the world is Sonny Trillanes?

Trillanes is not the only one who has appeared little alongside the slate. Sen Alan Peter Cayetano -- another NP candidate -- has also been barely spotted with Team PNoy. Sen Koko Pimentel, Sen Chiz Escudero, and former Las Piñas Rep Cynthia Villar have also been absent more often than not -- although the 3 have been significantly more present than Trillanes, even attending consecutive rallies in areas where they are weak or in their home provinces.

Cayetano is probably closest to Trillanes in terms of number of absences, but media will agree the former's is barely felt. Cayetano's staff is consistent in sending press releases to media about his PTK campaign -- which stands for his advocacies Presyo, Trabaho, Kita (Prices, Jobs, Salary) -- wherein the re-electionist visits various provinces to conduct listening tours with common people from different industries.

Trillanes sends few updates, having disseminated more emails to media when the Senate was in session.

His Twitter is probably the best indication of where Trillanes has been. It's hard to tell which forums and debates he has attended because of the scarcity of press releases -- although his tweets show he has been in a number of student forums in various provinces in Luzon, Visayas, and Mindanao.

Posts of his own rallies in Dumaguete, Caraga region, and, most recently, Zamboanga, are also sprinkled throughout his timeline. It is the same stops made by Team PNoy, but ones he chooses to visit on his own. He told Rappler he decides which provinces to visit according to his in-house polling.

Trillanes is his own campaign manager. His strategy, he said, is also partly shaped by his lack of resources.

"I am managing my own campaign and it's leaning towards ground operations since we have a fairly decent organizational network across the country, and also because our financial limitation hinder us from conducting a more media-centered campaign," he said. 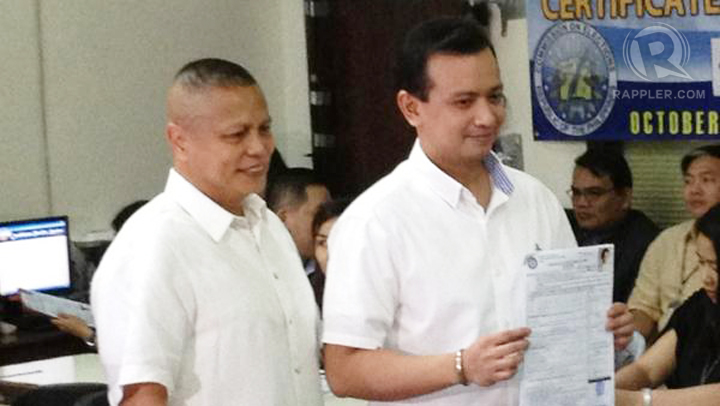 MAGDALO SUPPORT. Sen Antonio Trillanes IV shows his certificate of candidacy for senator at the Commission on Elections office in Intramuros, Manila, October 3, 2012. With Trillanes is former Marines Col Ariel Querubin, one of the leaders of the December 1989 coup. Photo by Rappler/Paterno Esmaquel II.

The network is the Magdalo Group of which Trillanes is chairman. Formed in 2003 when hundreds of junior officers and soldiers of the Armed Forces of the Philippines (AFP) staged the Oakwood mutiny against Arroyo's administration, Trillanes credits Magdalo for his 2007 Senate win despite his inability to campaign.

It was enough to ensure victory in 2007 despite having spent 4 years in prison, but will it give Trillanes a seat in 2013?

Team PNoy spokesperson Miro Quimbo is not worried, despite Trillanes's drop in survey numbers since the campaign began in February.

"He has his own network of campaigners, consisting of threads of local leaders stitched together by fervent loyalty to Sen Trillanes and his nationalist cause. They consist of Magdalo members, ex-military, members of the AFP, local peace and order formations," Quimbo said.

"These organizations are very fanatical and are fueled by direct contact with him. He recognizes that thus he needs to keep in touch with his base," he added.

Trillanes has experienced ups and downs in his Social Weather Stations survey numbers from ranking 5th-7th in August 2012, and dropping drastically to 11th in December 2012. He stayed at 10th-11th in January 2013, rose to 8th place, and stayed there from February to March, and dropped back to 10th-11th in the most recent poll conducted from April 13 to 15. He dropped 5% percentage points between March and April.

The numbers however, are still better than 2007's. Back then, Trillanes, who ran under the Genuine Opposition ticket, did not even make it to the top 15 bets of either Pulse Asia or SWS -- at least not until the final May 2-4, 2007 polling of SWS where Trillanes squeezed into the 15th spot with 24% voters' approval.

Less than two weeks later, Trillanes finished 11th garnering 37.9% of votes, about 11 million total, a surprise victory. He was the first detained candidate in Philippine history to win a national election.

In Quezon, when Trillanes' numbers first dropped, he showed little concern. Back then, he sat precariously on the 4th-12th spot in the Pulse Asia survey, but he registered the biggest drop in voting preference among the 33 candidates, losing 5 percentage points from January to February.

"I just have to accept my fate. I'll accept whatever is the decision of the electorate," he said, "It's just the nature of Philippine elections – one day you'll get to be the flavor of the month, the following month you get to be the bad guy. It's very fluid."

He looks back now at 2007, and insists he had a strategy then -- one that, he said, "analysts" didn't pick up on. He and the Magdalo Group harnessed the dissatisfaction of the public toward Arroyo's administration, he said, and were able to translate it into votes.

However, much has happened since then. Trillanes has clashed with Senate President Juan Ponce Enrile in public arguments on the Senate floor, aired on national television. He has been criticized for backdoor negotiations with China, and have been dismissed by critics as a reckless neophyte who has no political finesse, upstaged by Enrile. After all, Trillanes's largest drop in surveys in January covered the time when Enrile offered to vacate the Senate presidency after Trillanes bared an ouster plot. Eleven senators rejected Trillanes's move.

But then again, Trillanes has also served 6 years in the Senate and funded various projects. He says he has a strategy. Perhaps he continues to do what he knows has worked in the past -- staying away from the limelight, but working his Magdalo ties. Perhaps again, "analysts" don't understand.

Will it work this time around?

To Trillanes, it may matter little whether the media and public know exactly where he has been in the past months, as long as he is where he's supposed to be come May -- back in the Senate. - Rappler.com