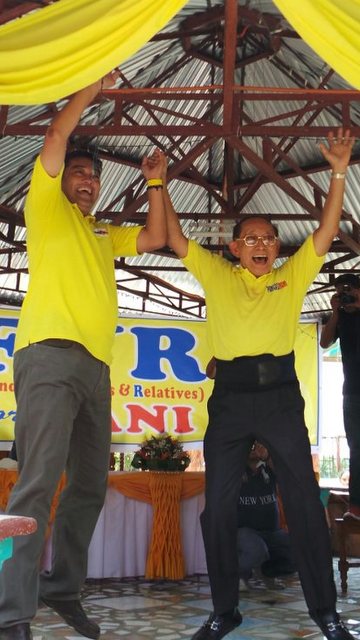 In a private resort in Barangay Baro, Asingan, the 85-year-old Ramos made a rare appearance in his hometown on Sunday, April 21, to make a pitch for Braganza. The affair was not meant to be a sortie but a family reunion, attended by about 1,000 Pangasinenses, composed mostly of members of the Ramos, Braganza and Agsalud clans.

In a speech inspired by the Philippines' recent credit rating upgrade to "BBB-" Ramos gave credit to Pangasinan's economy but said that the province will have more foreign investors should Braganza win as governor.

"Here in Pangasinan, BBB, without the minus, I said, BBB of Apo Espino stands for - Bagoong, Bangus and Bucayo," he said in the Pangasinan dialect. Ramos said another B could be added to the formula -- "BBBB - Bucayo, Bagoon, Bangus, Braganza!"

"'Four B's is almost an A. Combine the 4Bs and an A, and all investors will come in, even those with nuclear bombs, even the Chinese who are trying to conquer the South China Sea," Ramos said.

Ramos took a swipe at Espino as he also endorsed Braganza's running mate, former police chief Arturo Lomibao. "It is not only Espino who has a connection to the police because Lomibao is also there. With due respect to Ka Amado Espino, did he become a chief PNP?" Ramos said.

Espino was the former provincial police director of Pangasinan and regional director for Region 1. The re-electionist governor is running under the Nationalist People's Coalition (NPC).

Shahanis a no show

But the Ramos clan is not completely behind Braganza.

Noticeably absent in the gathering is Ramos' sister, former Sen Leticia Ramos-Shahani, and her son former Vice Gov Ranjit Shahani, who's seeking re-election as board member of the province's 6th district.

Ranjit Shahani had wanted to run for vice governor. But the Liberal Party chose instead the Braganza-Lomibao tandem, causing a falling out between the two cousins.

Last week, 17 mayors allied with Shahani allegedly signed a covenant expressing their support for Espino, a report that Braganza has denied.

Asked about their absence in the gathering attended by Ramos, Shahani told Rappler they were not informed beforehand that the former president was coming over.

In Pangasinan, the NPC's so-called machinery is large and intact -- especially relative to LP's. Of the 44 towns, LP is fielding only 29 mayoral candidates compared to NPC's 43. Of LP's 29, only 3 are seeking re-election while NPC has 28 re-electionists running.

Despite this, President Benigno Aquino III won huge here in 2010, emerging victorious by a wide margin in the presidential race. Braganza is counting on the same clout to carry him to victory.

"Aquino's endorsement is a huge push to any candidate not just in Pangasinan but in the whole country. But in the case of Pangasinan, the people here are also known to look into platforms not just personalities," Braganza earlier told Rappler. - Rappler.com