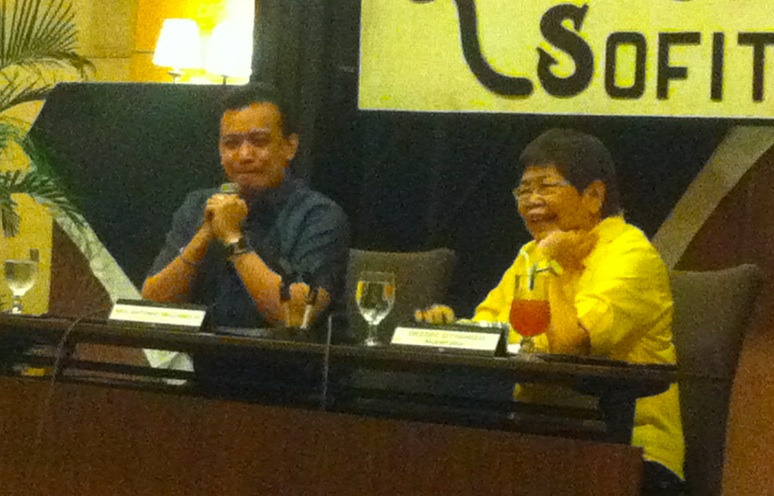 GIGGLING? Re-electionist Senator Sonny Trillanes sheds off his stiff image at a lunch forum. Beside him is columnist Deedee Siytangco. Photo by Natashya Gutierrez/Rappler.com

MANILA, Philippines – It was a rare show of Sen Antonio Trillanes IV's light side. And in that casual and relaxed lunch forum at the Sofitel on Tuesday, April 23, reporters and columnists saw the often stiff re-electionist show his "very different” side.

He gave some unsolicited advice to fellow re-electionist Sen Chiz Escudero, who has been in a very public conflict with the parents of his girlfriend, actress Heart Evangelista.

Trillanes also shared why he thinks some fellow candidates on the Team PNoy slate are not picking up in surveys. (READ: Last stretch: What do Risa, Jun, Jamby plan to do?)

If he were in Escudero's shoes, Trillanes said he would talk to Heart's parents, who recently held a press conference to broadcast their disapproval of Escudero. They called Escudero arrogant and an alcoholic.

"If I were Chiz, it would never happen to me," he said, adding he is the "favorite son-in-law."

Trillanes also said it may not be possible to for Team PNoy to win a 12-0, contrary to what their campaign manager Franklin Drilon claims.

"We may have difficulty with two,” referring to Akbayan’s Risa Hontiveros and the Liberal Party’s Jamby Madrigal.

“Senator Jun Magsaysay's numbers are picking up. He may make it," he said.

"Risa can't seem to have that connection with the masses, [although] she has the full package – she's smart, beautiful, and articulate," Trillanes said.

He offered an explanation: "There is more aversion to the militant, leftist type than the rightist type," he said.

Trillanes was ranked 10th-11th in the most recent SWS poll conducted from April 13 to 15, having dropped 5% percentage points between March and April. He is running for his second term in the Senate. – Rappler.com