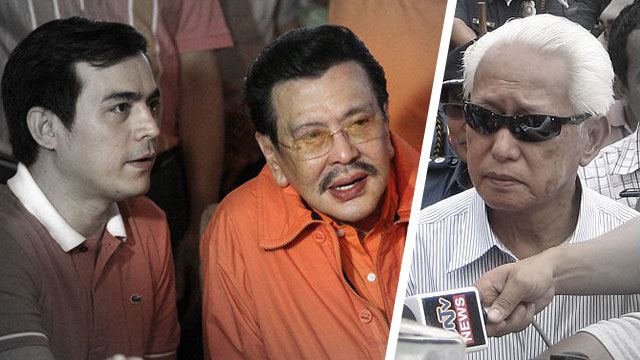 'NAKAKABUWISIT NA!' The campaign manager of re-electionist Mayor Alfredo Lim says thay have had enough of the attacks from the camp of former President Joseph Estrada.

MANILA, Philippines - The camp of re-electionist Manila Mayor Alfredo Lim reached its boiling point in dealing with attacks from his rival, after former president Joseph Estrada accused Lim of extorting from vendors.

He said that the Estrada camp is resorting to these allegations because it's threatened that Lim will have "a landslide victory" in the upcoming local polls.

Asked for an explanation as to why Lim pushed with the distribution of pedicabs during the campaign season, De Guzman said, "Bahala sila. Magreklamo sila." (I leave it up to them. Then they should file a complaint about it).

De Guzman also denied knowledge about Lim's involvement in "protection money" extorted by cops from vendors as alleged by Estrada.

In a statement released on Saturday, April 27, Estrada accused the Manila city government of accepting "kotong" or extorted money from vendors.

“I have visited all the areas and corners of Manila. I discovered that vendors pay protection money. That is the reason City Hall is not giving them license for their trade; they are left to remain as illegal vendors, so they are forced to continue to pay protection money,” Estrada said.

This was not the first time Estrada mentioned this. He brought this up during his debate with Lim at the University of the Philippines in Manila.

This time, however, Estrada offered details. He quoted the vendors as saying that 5 groups collect from them every day. "Each vendor pays from P40 and up depending on the type of goods they sell, the size of space they occupy and the location of their trade," according to the statement.

Estrada also stressed that he would wipe out corrupt cops, not vendors, if elected.

"Contrary to that rumor being spread by Lim, I am in fact even promoting more livelihood opportunities in the city especially for the poor vendors,” Estrada said.

“What I will remove is kotong (practice of extortion), the proceeds of which go to the Office of the Mayor and the police station commanders in the places where the vendors are located.” - Rappler.com