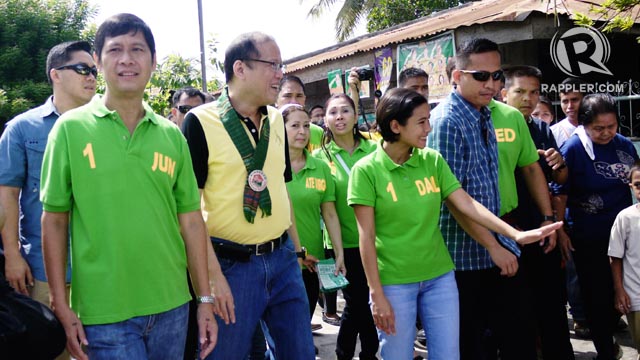 GENERAL SANTOS CITY – President Benigno "Noynoy" Aquino III jokingly admitted he was confused when he read that the dominantly yellow billboards did not bear the name of the candidates he will be endorsing during the rally of Team PNoy here Saturday, April 27.

“Akala ko po puro kakampi,” the President said. (I thought they were our allies.)

Yellow has always been identified with his late mother, President Corazon Aquino, who adopted the color when she ran against the late dictator President Ferdinand Marcos in 1986.

Three years before the historic snap elections, the President’s father and namesake Benigno Jr, a former Philippine senator, was to be greeted with yellow ribbons upon his return from exile.

But Benigno Jr was assassinated at the tarmac of the Manila International Airport upon his arrival, triggering massive protests that culminated in the ouster of Marcos in a popular revolt in February 1986.

Yellow has since been synonymous with the Aquinos, including the President, who always wears a yellow ribbon on his formal suits and Filipino barong. 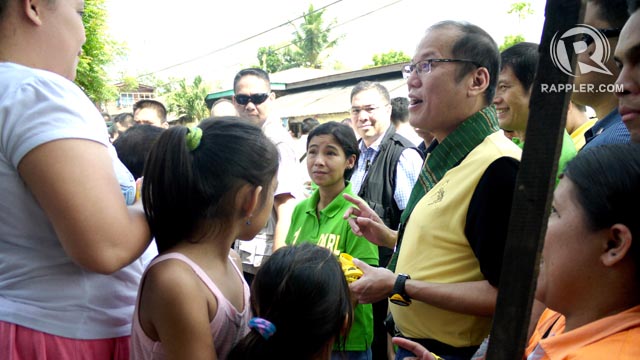 PUMPING FLESH. President Aquino takes time to talk to locals from General Santos City where local allies like the Antoninos are expected to have a tougher time. Photo by Ronald Velasquez

The local party allied with UNA however is wearing yellow as its signature color.

Aquino said the local opposition is trying to confuse the voters here.

The Antonino-founded Achievement with Integrity Movement (AIM) supported the candidacy of Aquino in 2010 and is now part of the ruling coalition.

AIM candidates have always worn the green and tangerine combination since the local party is allied with the Nationalist People’s Coalition, a member of the Team PNoy coalition.

Estrada won in General Santos City, as well as nearby Sarangani and South Cotabato, over Aquino in the 2010 elections. 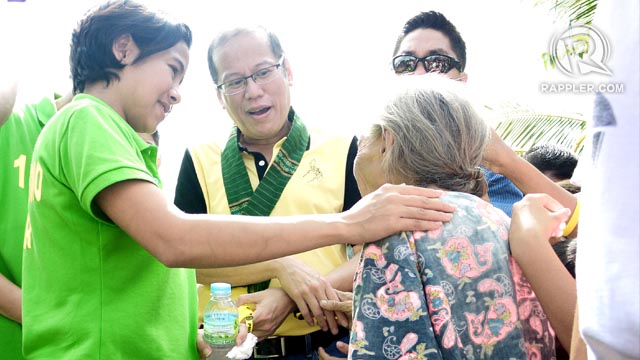 CAMPAIGNING. The President takes time to speak to voters from GenSan. Photo by Ronald Velasquez

In an open display of support for Antonino-Custodio, the President campaigned house to house with the city mayor and her slate in Barangay Labangal, an urban poor community.

Incidentally, the village chair of Labangal is Lorelie Pacquiao, sister-in-law of Sarangani Rep Manny Pacquiao who is backing Rivera.

The re-electionist Sarangani congressman, who is running unopposed in the province, is fielding his brother Rogelio against incumbent Rep Pedro Acharon Jr, another candidate Aquino also endorsed Saturday, for the 1st district of South Cotabato.

The President also made a direct attack against Rivera, saying he was told the opposition candidate was always absent during city council sessions.

But the biggest issue that dominated both the President and Custodio’s speeches was the pestering power supply problem in the city.

Aquino said power supply in the city will stabilize in 2015 when the Aboitiz-owned Therma South coal-fired power plant goes on commercial stream.

He likewise said Mindanao will already have excess power supply in 2017.

The opposition here is using the 7-hour daily brownout in the city against Antonino-Custodio who, in turn, is blaming the South Cotabato II Electric Cooperative for its alleged failure to secure adequate power supply.

Rivera and Custodio are running neck and neck in a tight mayoral race.

Many here have conceded that for the first time, the Antoninos are in danger of losing their tight grip on the city.

Rivera is the 3rd son of tuna magnate Rodrigo Rivera Sr who is a former friend and business associate of Adelbert Antonino.

The two parted ways in 2001 when Rivera’s eldest son Ryan ran but lost against Darlene in the congressional race for the first district of South Cotabato.

Darlene served 3 consecutive terms as member of the House of Representative until 2010 before trading places with Acharon who also served 3 three-year terms as city mayor. - Rappler.com