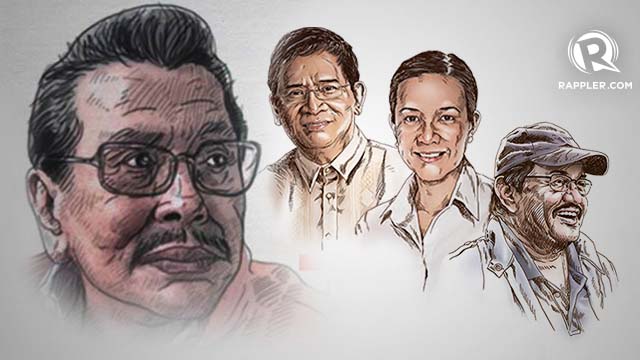 MANILA, Philippines - On election day, former President Joseph Estrada will shade the ovals across the names of 3 senatorial candidates in addition to the official bets of the opposition United Nationalist Alliance (UNA), which he heads.

Independent candidates Grace Poe, Edward Hagedorn, and Eddie Villanueva have the vote of the popular Estrada.

"These three are candidates whose hearts are truly for the Filipino masses, especially the poor, embodying what PMP (Pwersa ng Masang Pilipino) stands for and I support them fully," Estrada said.

Poe has told Rappler their family is still supporting Estrada despite UNA dropping her as guest candidate. The former censors chief chose to run under Team PNoy when President Benigno Aquino III said she couldn't be appearing onstage with the rival slates.

"I personally know that she was raised well to live with integrity and has a heart for the poor, like her father," Estrada said of Poe. "I know she will be a great senator and I am campaigning hard for her victory." Poe is the daughter of Estrada's best friend, the late Fernando Poe Jr.

Estrada added Villanueva to his list of senatorial bets because of his "dedication to the poor." Villanueva has told Rappler that Estrada has invited him to join UNA at the time that the opposition camp was considering dropping Loren Legarda, Francis Escudero, and Poe as common candidates with the administration.

“Erap came to my house more than a month ago,” Villanueva said. But he declined Estrada’s offer, saying he wants “to preserve moral ascendancy and my role as peacemaker.”

The TV evangelist added that he turned down Estrada's offer because his son, former party-list Rep Joel Villanueva is now director general of the Technical Education and Skills Development Authority.

Villanueva's Jesus is Lord Fellowship, though not known to vote as a bloc, has more than 15 million members.

Hagedorn, a close ally of Estrada, has said that it was Estrada who encouraged him to run for senator. The Puerto Princesa mayor though refused to run under UNA to avoid being tagged as a "political butterfly." He is a member of the Nationalist People's Coalition.

Estrada said he is supporting Hagedorn because of "his advocacy for the environment and sustainable development."

Rappler learned that UNA has been talking to Hagedorn since early January, ensuring him of support. - Rappler.com