Watchdog to UN: Stop Comelec's use of PCOS 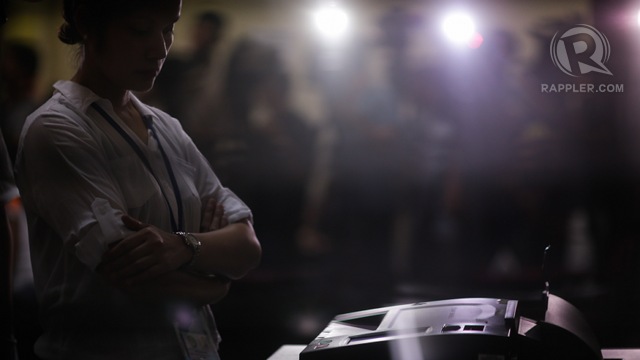 SCRUTINIZING PCOS. The law requires the Comelec to open the AES source code for a local review. File photo by John Javellana

MANILA, Philippines – A poll watchdog on Friday, May 3, filed a petition before the United Nations (UN) against the Commission on Elections (Comelec) for allegedly violating an international treaty.

Lawyer Harry Roque Jr, who represents the petitioner Automated Election Systems (AES) Watch, said he hopes the UN will declare that the Comelec violated civil and political rights for failing to open to AES for review the source code of the vote counting machines.

It is said to be the first election-related complaint to be brought to the UN.

AES also wants the UN Human Rights Commission (UNHRC) to compel the Philippine government to stop the use of the precinct count optical scan (PCOS) machine system in the automated elections on May 13.

AES alleges that the Comelec will violate Article 25 of the International Covenant on Civil and Political Rights (ICCPR), a multilateral treaty, if it proceeds to implementing the “unreliable” and “non-transparent” PCOS machine system in the elections.

Article 25 ensures citizens' rights “to vote and to be elected at genuine periodic elections,” and guarantees “the free expression of the will of the electors.”

The Philippines is a signatory to the ICCPR, which is part of the International Bill of Rights.

Roque said that, although the UNHRC's declaration would technically be non-binding, pronouncements made by international bodies have the force of law.

“Generally accepted principles of international law have the effect of local statute,” he said, adding that because the Philippines signed the ICCPR, it is legally bound to follow the document.

Roque admitted, however, that he did not know how long it would take for the UNHRC to decide on the petition. Previous cases have taken as long as 3 years, he said.

In any case, he said the petition will be the first election-related complaint to be dealt with by the UN, and will set a precedent for future cases.

AES Watch has repeatedly slammed the Comelec for failing to show the PCOS source code to local groups.

"There was no and has never been any source code held by Smartmatic both in 2010 and today," AES Watch said. Dominion Voting Systems, the company that owns the source code and leased it to Smartmatic, "has refused its disclosure and review under a 2009 licensing agreement," it added.

Brillantes had said the lack of a local source code review will not affect the legitimatcy of elections. (Read: FAQs: Why worry about PCOS code?)

On Friday, he also said the Comelec is ready to show the source code used in 2010, which is kept at the Bangko Sentral ng Pilipinas.

“Maraming nagsasabi na wala raw 2010 source code. Gusto naming ilabas, para masabing meron,” Brillantes told reporters. (Many people say we don't have the 2010 source code. We want to show it, so we can prove it's there.)

Meanwhile, the source code for the 2013 election is still held hostage by a legal battle between foreign firms that supplied software and the machines. Brillantes said the Comelec is still working to get it, to open it to a review by local watchdogs. – with reports from Paterno Esmaquel II/Rappler.com