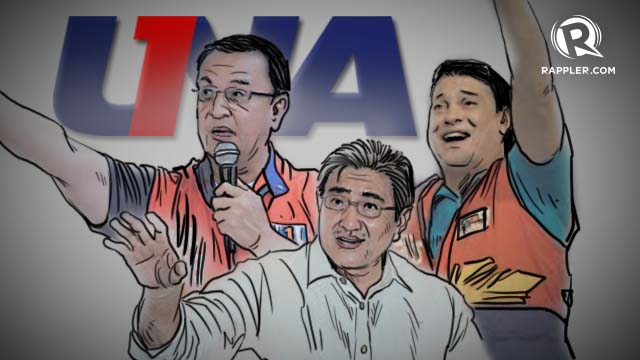 MANILA, Philippines – Ten-2, 9-3 are the combinations in latest surveys in favor of Team PNoy. Can candidates of the opposition United Nationalist Alliance (UNA) win more seats?

They sure are trying.

In the final week of the campaign, UNA bets at the bottom of the list of candidates with a statistical chance of winning are doing “everything short of a heart attack” to make it to the top 12.

“I could slip out and I’m worried but I’m doing everything physically possible,” Zubiri told Rappler. “There’s nothing more physically possible that I can do without getting a heart attack. We’re going to 8 to 10 towns a day, 4 to 5 provinces a week, in the heat of the sun, in the cold of the night, on a flatbed truck barnstorming the whole country.” 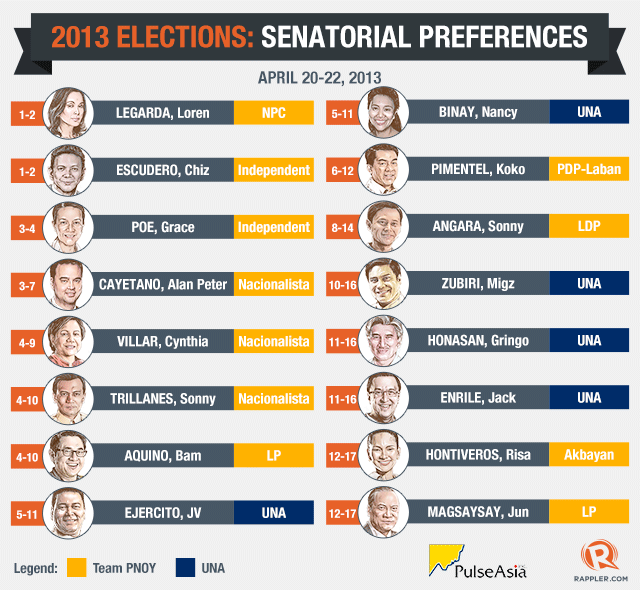 Zubiri placed 10th-16th while Honasan and Enrile were tied at 11th-16th.

How will they spend the crucial last days of the campaign? 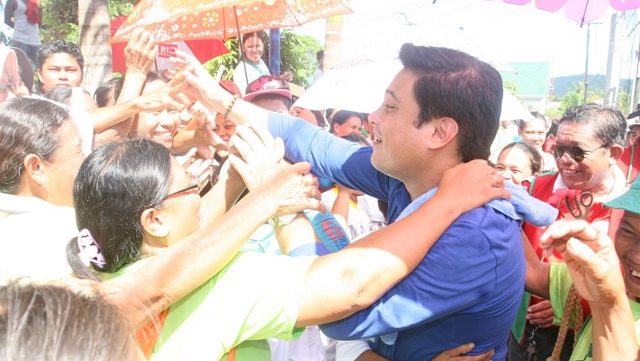 ‘SHORT OF HEART ATTACK.’ Resigned Sen Migz Zubiri says he is doing everything physically possible “short of a heart attack” to make it to the top 12. File photo from Zubiri’s Facebook page

While the UNA slate is visiting Camarines Sur and Camarines Norte over the weekend and Capiz on Tuesday, Zubiri has his own schedule.

The former Bukidnon representative campaigned in Laguna on Saturday, May 4, and will head to Pangasinan on Monday and Tuesday. For the rest of the week, Zubiri will go on market tours and rallies in Metro Manila in areas like Divisoria and Commonwealth.

Zubiri said if he goes out of the capital, it will just be in nearby provinces like Bulacan and Cavite. He said he is focusing on the National Capital Region and the rest of Luzon, where he is weak.

“The name recall will be there. If we did it too early like a month-and-a-half ago, it might have worn off,” Zubiri said in a phone interview on Saturday.

Zubiri is also expecting endorsements in the coming week but prefers that the groups make the announcement. In past weeks, he got the endorsement of the White Vote Movement, which includes El Shaddai.

While Zubiri is focusing on where he is weak, Enrile is doing the opposite.

The Cagayan representative said in a previous press conference, “We are tying up the areas where we are strong. Individually, in the last week, I will ask permission if I can spend the time in the north.”

Honasan is sticking to his own schedule while joining some UNA sorties. Honasan has visited Palawan, Tuguegarao, and is heading to Camarines Sur, Quezon and Batangas.

“There is a procedure in choosing the areas. I map this with my organization and I feel I should deliver the message to audiences in these locations. These are areas I have chosen which are accessible, considering my limited resources,” Honasan told Rappler.

Honasan said he is relying on a network and constituency that include the military, police, and farmers and fisher folk. 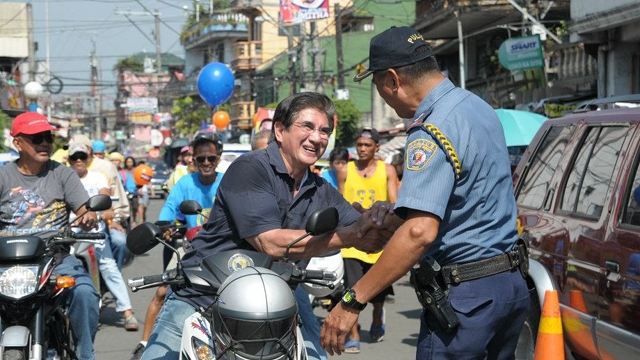 The UNA bets also poured their remaining funds on ads, admitting that the race is primarily media-driven.

Zubiri said his ad showing Vice President Jejomar Binay endorsing him will continue to air. He said his overall messaging focuses on his track record as a lawmaker and more importantly on his character.

“Masipag, mapagkumbaba, madaling lapitan. Higit sa lahat, ‘di mahalaga sa kanya ang kapangyarihan,” Zubiri sums up the message. (Hardworking, humble and approachable. Most of all, power is not important to him.)

“For whatever it’s worth, nobody has done what I’ve done. It was the first time in history that a high-ranking government official resigned from his position because of an electoral controversy. It’s contradictory to the Filipino political psyche, which is to stay on forever, to fight within the court. I want it to be highlighted.”

He said he was able to get into the magic 12 even without his new ads factored in, which began airing on the last day the April survey was conducted.

Zubiri resigned in 2011 following exposes of cheating in the 2007 polls. In that election, he and Sen Aquilino “Koko” Pimentel III fought for the last Senate slot. His resignation came just days before the Senate Electoral Tribunal named Pimentel the rightful winner in the polls.

Honasan has also begun airing TV ads in past weeks, one of the last among senatorial candidates to do so. In his ad, he alludes to sacrifices he made during the 1986 People Power Revolution, and as a former rebel.

“I made a judgment call that to maximize my limited resources, I would save for the last few days to generate respectable presence on TV,” he said.

Honasan said he is also doing many media interviews to reach a wider audience.

In contrast, Enrile has been airing ads since last year. He has been named one of the top TV ad spenders of the campaign.

Enrile’s latest ad shows him with Sen Jinggoy Estrada and actor Tirso Cruz III dancing to his catchy jingle, while interacting with people in markets.

Fighting for last? ‘We’ve been there’

Zubiri and Honasan said that while they are concerned about battling for the last slots, they had already experienced it in the past.

“I’ve been there. I’m not afraid but I’m concerned. I’m confident that if Visayas and Mindanao deliver and I am number 12 or 13 in Luzon, we’ll be able to win,” Zubiri said.

Honasan, the only re-electionist in the UNA slate, said surveys affect but do not bother him.

“This is my 4th national election and I’ve been in tighter spots before. In 2007, given I had just 3 weeks out of the campaign period after coming out of detention, we made it. So ultimately, it’s not going to be the surveys or even media or one group that will decide, it will be the Filipino electorate.” 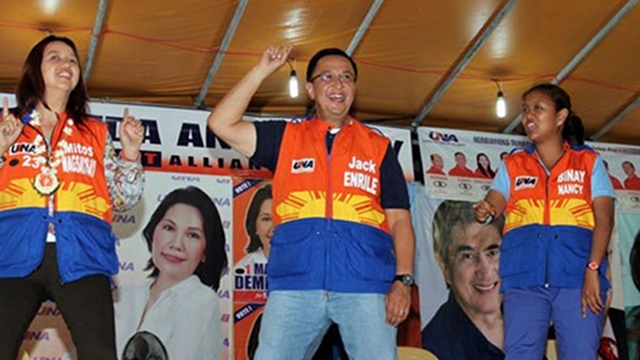 UNA campaign manager Navotas Rep Tobias “Toby” Tiangco told Rappler that as far as ads are concerned, his candidates are on their own.

For UNA, the ground war is still key.

“If there are no funds, the next best thing is sorties and rallies. There’s nothing much we can do. We have to stick with that because of our limited funds and people are afraid to donate to us,” he said.

Tiangco referred to the arrest of an UNA mayoral bet in Iloilo for tax evasion last Wednesday. He said it was proof that the Bureau of Internal Revenue is “now a tool for harassment.”

Still, Tiangco said UNA is banking on more endorsements and commitments of local leaders and groups. Yet he refused to name them.

“Sometimes, whispers are louder than what’s shouted on stage. If LP goes there, they’ll shout 12-0 but what is the whisper, instruction on the ground?”

He again cited the 2010 statement of former Liberal Party vice presidential bet Mar Roxas claiming victory based on a Pulse Asia survey. He said this proves that the game is not yet over.

“Just look at the victory of VP Binay in 2010. There are factors there that still remain tightly guarded secrets until now. That’s a tested formula. That only proves that surveys are not that accurate,” Tiangco said.

“Just based on that survey, Mar said he will win. Why didn’t he win?” – Rappler.com