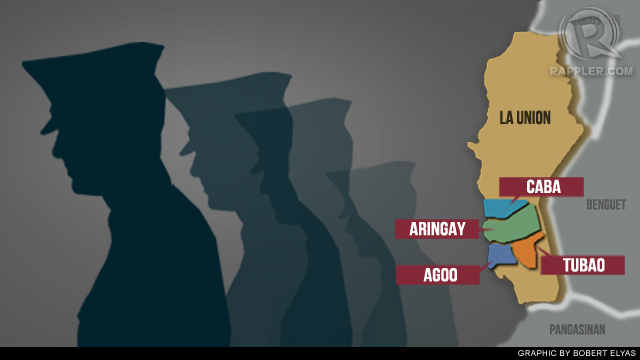 The NPC partymembers, led by 2nd District Rep. Franny Eriguel and wife Sandra Eriguel, the mayor of Agoo, and Tubao Mayor Dante Garcia, said in a press statement that the removal of the police chiefs in their towns was without any basis.

La Union PNP Senior Supt. Ramon Rafael told the protesters the police chiefs would possibly be reinstated after May 13.

The towns of Tubao and Agoo were declared political hotspots as early as December 2012 due to a series of the killings in the two towns, culminating with the murder of former Tubao vice mayor Atty. Lazaro Gayo in his office in Agoo.

Supporters of Mayor Sandra Eriguel and former Army General Mario Chan (LP) have clashed a number of times already. This tension was compounded when the Eriguels fielded Mario’s aunt, Prospera, to run as mayor under the Liberal Party.

In Caba, it will be Michelle Ortega running for mayor under PDP-Laban against Edgar Bacungan (NUP) and Clyde Crispino (NPC). Ortega is the daughter of former Baguio police chief Roberto Ortega, who is running for a councilorship in Baguio City. - Rappler.com