Will PNoy or Gwen prevail in Cebu? 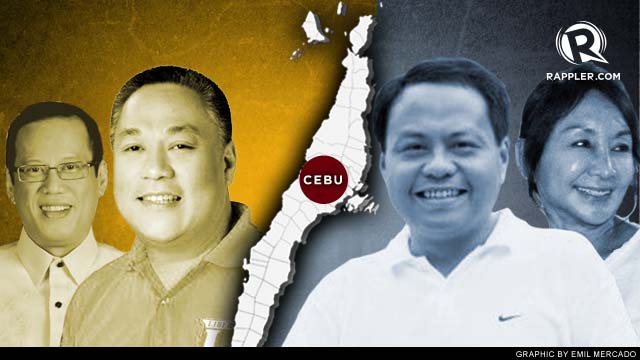 CEBU, Philippines – On paper, there is not much difference between the two men vying to lead the country’s de facto second capital.

With Aquino’s backing, Davide seeks to end the Garcias’ 18-year hold on the capitol. Garcia is batting to continue his sister’s leadership, cut short by the President’s decision to suspend her in December.

They have anchored their campaign so much on the two that the race for Cebu governor is seen as a proxy war for their patrons. Whose candidate will win? 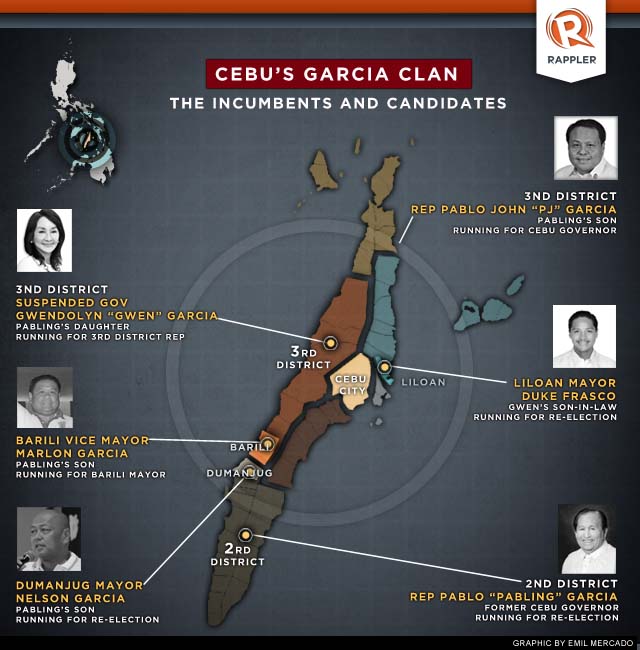 A first class province, Cebu is located in Central Visayas. As a hub for business, tourism, and education, it is considered to be one of the country’s most developed provinces with its capital, Cebu City, rivaling Metro Manila.

For all of its advancement, Cebu’s leadership has been tied to old dynastic politics.

PJ, for instance, is switching places with Gwen, who is running for congresswoman of the 3rd district after 3 terms as governor. Their father Pabling was governor also for 3 terms before joining Congress. He is now running for re-election in the 2nd district.

Two other sons of Pabling are vying to be municipal mayor. Gwen’s son-in-law, Duke Frasco, is running for re-election as mayor of Liloan in the 5th district. Duke’s wife, lawyer Christina Frasco, is also seen as a potential politician.

University of the Philippines Cebu political sociology professor Phoebe Sanchez says the practice dates back to 1907 with the Osmeñas and Cuencos. Since then, other families emerged and turned Cebu’s 6 districts into their own enclaves: 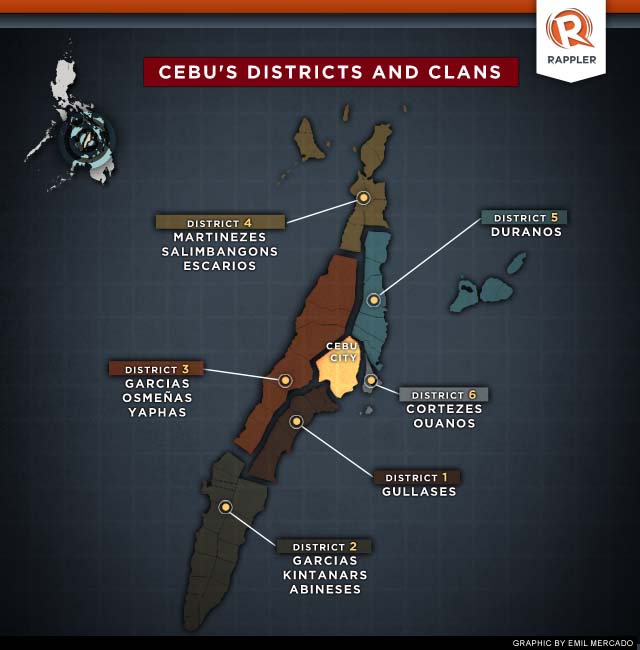 Sanchez says these families came to power largely because they own land holdings or control industries and services that allowed them to act as patron to their constituents.

The Garcias though are another animal. Lawyer and political commentator Frank Malilong says their edge is they are well-educated, adept at forging alliances.

Pabling is known as an articulate speaker, a brilliant lawyer, and an astute politician. He was the lawyer of the Duranos, known Marcos allies in the 1970s.

“The Garcias are a creation of Lito Osmeña,” Malilong said, referring to Cebu’s former governor. “Lito did not have anyone from the family to succeed him. He became very close to the Garcia family so basically it was Lito who gave the Garcias a break.”

In 2004, the Garcias were credited for delivering votes for their close ally, then President Gloria Macapagal-Arroyo. Malilong and political observers call this a misconception. Arroyo got one million votes in Cebu, the crucial margin to win over Fernando Poe Jr.

“They did help but remember that at that time, all the leaders of consequence in Cebu were for Gloria. To her credit, she was able to coopt all the warring factions in Cebu,” Malilong said.

Compared to Cebu’s older families, the Garcias are a relatively new player, coming into power only after 1986. Yet they have dominated the capitol for nearly two decades with Pabling and Gwen’s successive terms.

In an interview with Rappler, Davide says he is running to break the Garcias’ monopoly in the office of the governor. 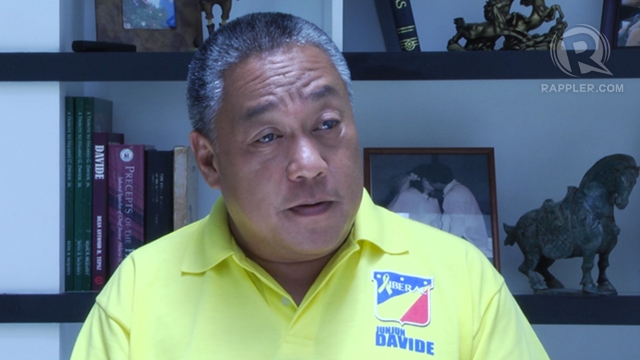 ‘WASTEFUL SPENDING.’ LP Cebu gubernatorial bet Junjun Davide campaigns on a platform of change, saying there must be a stop to the Garcias’ wasteful spending of public funds and monopoly in the office of the governor. Photo by Rappler/Franz Lopez

Besides the dynasty issue, there are many reasons why Davide is running after losing to Gwen in 2010.

Davide told Aquino, “If you say so, Mr President.”

Davide and Aquino have cause to be encouraged by the 2010 results. Gwen defeated her challenger by 96,341 votes, a smaller lead compared to her victory over her 2007 rival, former congressman Antonio Yapha. She then won by 452,882 votes.

Some observers called it a feat for Davide, a virtual unknown in the province then. Davide is better known in Cebu City, where he was councilor for two terms.

As a highly-urbanized city, Cebu City’s residents do not vote for provincial officials. To run for governor, Davide transferred residence from Cebu City to his family’s hometown, Argao in the 2nd district.

“It’s my observation since 2010 that the Garcia administration had been spending public money as if it were their own personal money. I saw the wasteful spending of public funds,” he said.

Davide cites as an example the case that earned Gwen the derisive moniker “Balili queen.”

In 2008, the provincial government under her leadership purchased the Balili Estate in Naga, Cebu for P98.9 million. The Ombudsman found that a huge portion of the land was underwater, and sued Gwen for graft before the Sandiganbayan.

Davide and running mate Acting Gov Agnes Magpale say that under Gwen, the capitol’s debt ballooned to nearly P1 billion. When Magpale took over after Gwen’s suspension, she said the general fund was down to P90 million and the province was already dependent on international revenue allotment.

Davide also accuses the Garcias of disregarding basic services in pursuit of vanity.

“I learned last year that the budget allocated for agriculture was only P18 million annually. If you compare this to the budget allocated to Sugbo TV, the TV outfit of the provincial government where you always see the face of the suspended governor and members of her family, that’s P30 million.”

“Now, if the P30 million were used for building more classrooms, giving more scholarships to poor students, improving hospitals, that would help a lot of Cebuanos but sadly, this is not the situation,” Davide added. 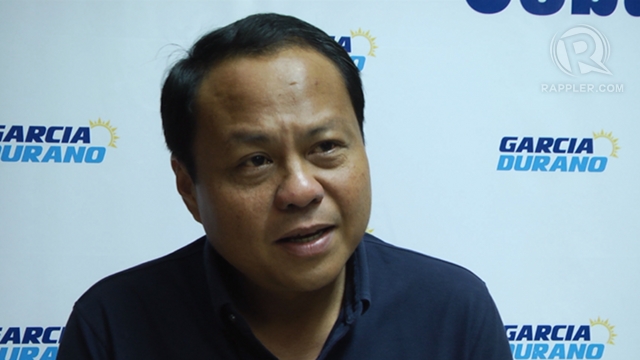 Despite all the scandals linked to his sister, PJ has no qualms about carrying the family torch. His campaign slogan “Padayon Jud,” a play on his nickname, means to continue or forge ahead in Cebuano. His local One Cebu party is allied with the opposition United Nationalist Alliance (UNA).

“Cebu has achieved a lot over the last 9 years under Gov Gwen Garcia,” PJ told Rappler.

“Cebu needs continuity. Cebu’s growth has been because of investor confidence, and I think business people need to feel there is some continuity, predictability even with some change in the administration.”

The youngest of the Garcia brood of 8, PJ smarts at Davide’s dynasty barb.

“If we had control for 18 years and we were neglectful and instead of Cebu being the number one province, we were number 70 then certainly, I will agree with Atty Davide that there should be change. But the issue will fall flat and will not stick because our family has tried our best to lead Cebu to where it is right now.”

Gwen’s staunch defender, PJ says the accusations against his sister must be proven in court. He also says what the LP tandem calls debt are actually “estimates of payables” that are not yet due and demandable.

On Sugbo TV, now renamed and repogrammed, he has a simple explanation.

“Sugbo TV was there to serve a purpose: to inform the people about the activities of the province, programs, projects and since Gov Gwen is the governor, who will spearhead these programs? So if there is news about these programs, how can the news avoid featuring the governor?”

To Magpale, he quipped, “She should have told us so we could have featured her face instead.” 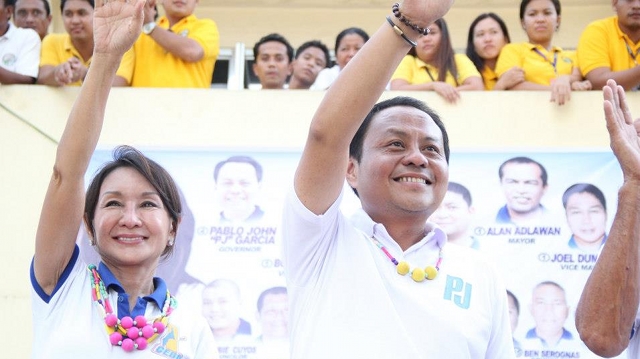 Messaging is not the only factor that divides the gubernatorial bets. In personality and presence, the two are incomparable.

A former editor-in-chief of UP’s Philippine Collegian, bar topnotcher, and two-term congressman, PJ inherited his father’s way with words and politics. He does not hesitate to go on the attack.

The taunt stems from the former Chief Justice’s active campaign for his son, not just in sorties but also in TV ads. Aquino also fights the battle for his candidate.

In a visit to Cebu in late April, Davide’s principal took a swipe at PJ’s sister. 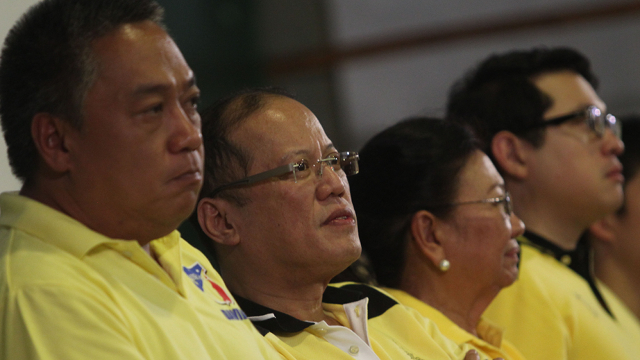 Davide shrugs off Garcia’s criticism. He admits the endorsements he gets from his father and the President boost his campaign.

After all, Aquino won via landslide in Cebu in 2010 by 759,938 votes. Cebuanos also hold Davide’s father in high regard.

Reticent and unassertive, Davide has yet to grant an invitation to debate with the more bombastic PJ. With his passive personality and lack of experience in provincial politics, local journalists have asked why Davide was the one drafted to run for governor and not his feisty running mate, acting governor Magpale.

To Davide, his supposed "weakness" puts him in contrast with traditional politicians.

“I’m the exact opposite of the suspended governor, of the Garcias,” Davide said.

Davide’s backer and Gwen’s archenemy, Cebu City 2nd District Rep Tomas Osmeña, admits that the yellow camp is waging a projection war. He calls it “the battle of good against evil.”

“PJ is just a kid brother of Gwen. He cannot move without Gwen. Gwen is the real candidate. PJ is just the face. It’s really Gwen,” Osmeñã said.

Malilong says dragging Gwen into the race cannot be avoided. “There are people who say, and I think with a certain truth in it, that she is one of the best performing governors. The only trouble is she is perceived to be spiteful, vindictive and she has a temper. She has rubbed so many people the wrong way.”

Malilong added: “Gwen is very much a factor. She was governor for 9 years and she is the kind who evokes very strong emotions, whether you like her or you dislike her. So this elections, one of the biggest factors will be how you look at Gwen and her governance of the province.” – Rappler.com