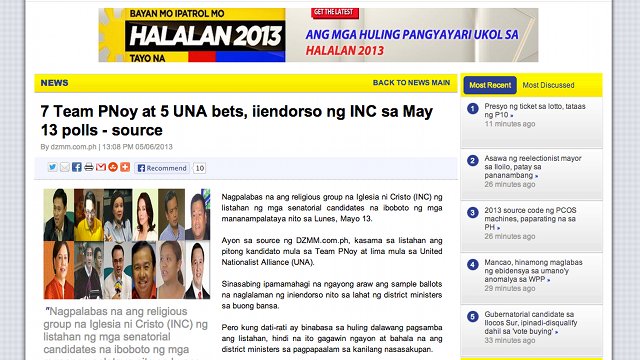 MANILA, Philippines - The bloc-voting Iglesia ni Cristo (INC) has chosen the 12 senatorial candidates it will support on May 13, according to a report by DZMM.com.ph.

The INC support is not a sure ticket to winning an election, but it plays a deciding role in close races. According to analysts, the religious group can easily deliver a minimum of 3 million votes for the chosen candidates.

Based on the latest Pulse Asia survey, the candidates who made it to the Magic 12 that didn't make it to the INC list are re-electionists Francis "Chiz" Escudero and Aquilino "Koko" Pimentel III and former Sen Juan Miguel Zubiri.

Pimentel and Zubiri are in dangerous positions, ranking 10th and 11th, respectively, in the Pulse Asia survey.

The candidates outside the Magic 12 who made it to the INC list are Sen Gringo Honasan (13th), Cagayan Rep Jack Enrile (14th), and former Sen Richard Gordon (17th).

Candidates refused to confirm DZMM's list. They said they cannot comment until it is officially announced. - Rappler.com