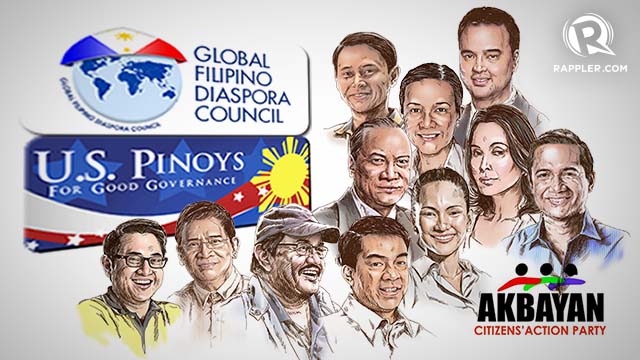 In a statement on May 6, US Pinoys for Good Governance (USP4GG), which is led by philanthropist Loida Nicolas Lewis, and the Global Filipino Diaspora Council (GFDC), said their choice of candidates was based on "competence, integrity and a track record of accomplishing observable good results that benefit people."

Majority of their bets are from the administration Team PNoy coalition, while 3 are independent.

Both organizations endorsed the following:

Teddy Casiño was picked only by GFDC.

Both endorsed the Akbayan partylist.

“Having essentially the same objective criteria, it’s perhaps not surprising that the candidates and partylist endorsed by both organizations came out a mirror image of the other – except for the addition of Teddy Casiño,” Ted Laguatan, spokesperson and legal counsel for USP4GG and GDFC, said.

“We are especially supportive of Aquilino Pimentel and Risa Hontiveros for the roles they played in securing the congressional passage of the amended Overseas Absentee Voting Act,” San Francisco-based lawyer Rodel Rodis and president of USP4GG separately told Rappler. The amendment is now up for President Benigno Aquino III's signature.

Amendments to the OAV include the removal of a provision requiring Filipinos who are abroad to issue an affidavit where they declare they will return to the Philippines within 3 years after being registered as an overseas absentee voter.

Laguatan and Rodis earlier lobbied for the reinstatement of the 239,000 overseas voters. Only 20% of these voters, however, will get ballots.

The Comelec reported that 915,000 OAVs are registered to vote this election. Overseas voting began on April 13 and will end on May 13.

USP4GG is a US-based organization that works to “harness and mobilize the Filipino diaspora to work to end corruption in the Philippines."

GFDC is a global organization of overseas Filipino community leaders from 27 countries. It was formed after the first global Filipino summit in Manila last 2010.

Both hope to influence their networks abroad and in the Philippines to go out and cast their votes. - Rappler.com