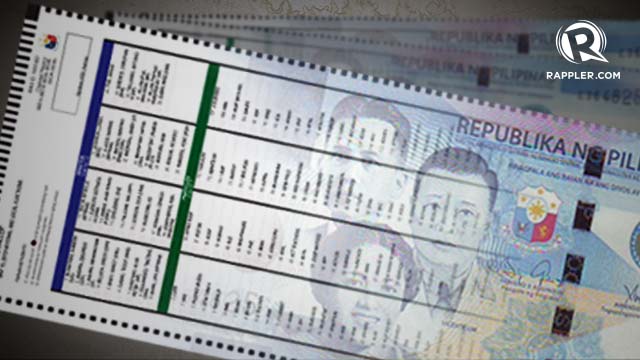 MANILA, Philippines (UPDATED) – Do you see a vote buyer near you? You can do more than simply report that person. Now, you can arrest that person even without a warrant, based on an unprecedented election rule.

Commission on Elections (Comelec) Resolution No. 9688, which implements the so-called money ban, authorizes the warrantless arrests of vote buyers and sellers.

“To facilitate the apprehension and prosecution of vote buyers and sellers, any law enforcement officer or private person may, without a warrant, arrest a person when, in his presence, the person to be arrested has committed, is actually committing, or is attempting to commit the election offense of vote buying and selling,” the resolution states.

By making this rule, the Brillantes-led Comelec offers its own interpretation of Article 266 of the Omnibus Election Code, which bans warrantless arrests “in connection with the election campaign.”

This Omnibus Election Code prohibits warrantless arrests “for any alleged offense... through any act or language tending to support or oppose any candidate, political party, or coalition of political parties.”

Comelec Resolution No. 9688 interprets this provision “to cover only offenses directly connected with Article X of the Omnibus Election Code on 'Campaign and Election Propaganda.'”

How does one conduct a warrantless arrest? Rule 113 of the Rules of Court sets the following conditions:

Under the new resolution, the Comelec also directs the National Bureau of Investigation and the Philippine National Police Intelligence Services “to conduct surveillance and intelligence operations to counter vote buying and, if necessary, entrap vote buyers and vote sellers.”

An election lawyer for over two decades, Brillantes has vowed to use his experience to cleanse the election process. In an earlier interview with Rappler, he said his knowledge of dirty tricks works to his advantage.

In another interview with Rappler in December 2012, Comelec commissioner Grace Padaca already stressed the importance of arresting vote buyers to reform the electoral process.

“It should not be difficult. If we just arrest two to three people in barangays and get the message across that this is a violaton of the law and for this you will be accountable, I think that will have some great effect on the need to eliminate or reduce vote buying,” said Padaca, a former Isabela governor.

In a first-of-its-kind rule, the Comelec on Wednesday implemented a "money ban" to limit cash withdrawals to P100,000 from Wednesday, May 8, to election day, May 13. (Watch more in the video below.)

Under Article XXII of the Omnibus Election Code, vote buying is defined as giving, offering, or promising money, favors, or jobs in exchange for getting a person's vote for the principal or causing the person to vote against somebody else. It holds both the vote buyer and vote seller criminally liable.

Violators will suffer imprisonment of up to 6 years, and will suffer a permanent disqualification from holding any public office or exercising their right of suffrage.

Based on observations by poll watchdogs, vote-buying has become more rampant under the automated election system. This is because the automated system has made it more difficult for operators to cheat during canvassing – an observation that critics say is arguable. – Rappler.com