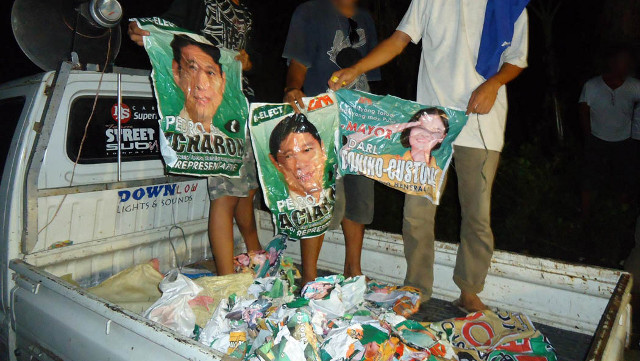 TORN UP. 54 sacks of posters of candidates from the Achievement with Integrity Movement bets was found on the evening of May 7. Photo by Aquiles Zonio

GENERAL SANTOS CITY, Philippines - The personal aide of Rep. Manny Pacquiao is in the hot seat after a van and a utility cab loaded with sacks of torn posters of a rival party were flagged down in a village here Tuesday evening, May 7.

Found were 54 sacks of posters of candidates from the Achievement with Integrity Movement (AIM) whose congressional bet is re-electionist Rep. Pedro Acharon Jr.

The van still has posters of the congressman’s brother who is running under the People’s Champ Movement (PCM).

The van is owned by Bren Evangelio’s company Down Low which rents sound systems. Evangelio is personal secretary of Rep. Pacquiao.

Calls made to Evangelio were left unanswered.

PCM is allied with the United Nationalist Alliance (UNA) while AIM is identified with the administration coalition Team Pnoy.

Conel Village chief Butch Santos said he was told that the crew of the vehicles were reportedly paid P6,000 per sack of torn AIM posters. The vehicles, including the drivers and the crew, were brought to the General Santos City Police Station in Camp Lira for further investigation. 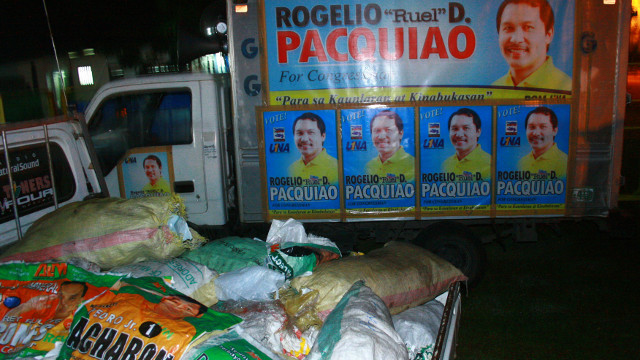 POSTER WAR. The vehicles with loaded with the sacks of torn posters. Photo by Aquiles Zonio

Interviewed by the local station of ABS-CBN here, Pacquiao last night said he was not aware of this, but promised to look into the incident.

PCM mayoral candidate Ronnel Rivera also said he already ordered his campaign manager to investigate the matter. He, however, assured that there were no orders from his end to tear the posters of AIM candidates. He said they need to know why they did it and who ordered them to do it.

“We have been leading in the surveys. We have no reason to do that,” Rivera said.

Custodio likewise said they are doing their own inquiry and will file the necessary charges against the suspects.

“(Those are) violations of our election laws. Magpa-file kami ng kaukulang kaso (We will file the appropriate case),” the city mayor said.

The city mayor said it was a desperate move by their detractors.