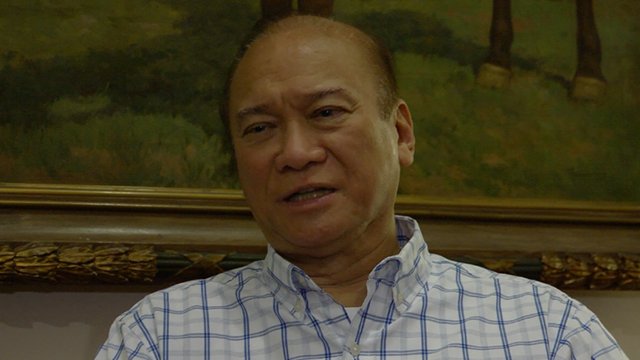 CHOSEN ONE. President Benigno Aquino III personally pushes to get former senator Jun Magsaysay back into the Senate through a last minute TV ad. Photo by Franz Lopez.

MANILA, Philippines - President Benigno Aquino III badly wants former senator Jun Magsaysay to win a senatorial seat. So much so that he is personally appealing to voters to add him to their list of chosen bets.

In a new television ad set to first air on Thursday, May 10, Aquino makes one final plea to voters to include Magsaysay in their ballots. He cites Magsaysay's work with the poor and his fight against corruption, and asks Filipinos not to forget his name on election day.

It's a last-ditch effort to get the 74-year-old Team PNoy bet into the winning circle -- and push for a 10-2 win in favor of the administration ticket, according to a campaign insider.

The ad was shot on Tuesday, May 7 after Malacañang itself reached out to Magsaysay.

Magsaysay told Rappler he was initially surprised because there were barely any days left but welcomed the suggestion. He asked about the storyboard and the theme, but was told it would be taken care of.

He said a team led by ad veteran Yoly Ong conceptualized the commercial which was put together in 48 hours.

Aquino shot the ad without Magsaysay present. "I wasn't there," Magsaysay said. "He himself as the political leader is making a final appeal."

Magsaysay expressed his gratefulness for the "final effort," and for the President's personal decision to "set aside time" to shoot the ad.

He said his team has replaced a couple of ads they had lined up to air on TV with the new ad of the President.

While Aquino appears in several ads with individual candidates, the shoots for those commercials were all scheduled in one day a few months back, and available to any Team PNoy candidate who wanted to appear in an ad with him.

This last-minute presidential offer was made only to Magsaysay.

Magsaysay is one of the 3 administration candidates who have yet to make it to the so-called Magic 12 in surveys, along with former Akbayan Rep Risa Hontiveros and former senator Jamby Madrigal.

Read: What do Risa, Jun and Jamby plan to do?

According to the campaign insider, the decision was based on trends in surveys, which showed that of the bottom 3, it is Magsaysay who has shown the most potential to crack into the winning circle. Magsaysay's numbers have steadily risen in surveys over the past two months.

The latest Pulse Asia survey taken from April 20 to 22 shows Magsaysay on the 12-17th spot. It was his first time to break into the winning list of the polling firm, making him one of its 16 probable winners.

The final Social Weather Stations survey before the elections, conducted from May 2-3, also showed Magsaysay fighting for a senatorial seat. He was ranked 14-15, making him one of the last 6 candidates fighting for the final 3 slots.

As it stands, surveys predict a 9-3 result in favor of Team PNoy, although the race is tight.

If the new ad is successful, Magsaysay may just be able to dislodge the opposition candidates fighting for a seat -- namely Sen Gringo Honasan, Cagayan Rep Jack Enrile and former Sen Miguel Zubiri. A Magsaysay win would make it 10-2 for Team PNoy, the administration's best case scenario.

Magsaysay was approached by the Liberal Party when it was putting together its senatorial slate. Having been retired for 5 years at that time, the former senator agreed to return to politics to support the reforms of Aquino. - Rappler.com