UNA to PNoy: Crack down on LP operators 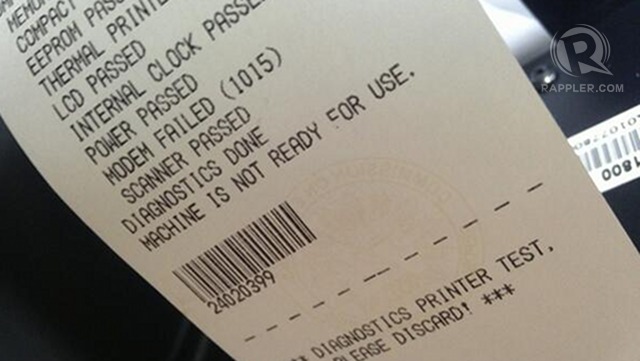 POLL FRAUD? UNA calls on President Aquino to crack down on supposed operators of his party who may exploit weaknesses in the automated elections system. File photo by Karlos Manlupig

The opposition United Nationalist Alliance (UNA) called on President Benigno Aquino III to crack down on operators supposedly of his Liberal Party (LP), warning against cheating in the May 13 polls.

In a press statement on Thursday, May 9, UNA campaign manager Navotas Rep Tobias “Toby” Tiangco detailed what he called “disturbing developments” that are causing anxiety about the conduct of the polls.

Tiangco said the power outages in Luzon and Mindanao are just the latest of these problems, on top of technical and legal issues that the Commission on Elections (Comelec) must settle within the week.

UNA joined poll watchdogs in expressing concern about issues that operators may exploit for fraud:

“It does not inspire confidence that one person with access to the compact flash (CF) card carried by any one of the machines can corrupt the result. A recipe for dagdag-bawas (vote padding and shaving),” Tiangco said.

(Comelec Resolution 9640 though states that it is the chairman of the board of election inspectors that must enter the security PIN.)

“This means the embedded program can be altered. And the PCOS machines no longer have the vote verification receipt with which voters can check if his ballot was read right,” Tiangco added.

The Center for People Empowerment in Governance (CenPEG) has also expressed concern about the CF cards.

In a briefer on its website, it said, “New data can be supplanted on the device and thus tampered with, especially in the absence of industry-prescribed safeguards like digital signature.”

Tiangco said that while Comelec finally presented the source code for the PCOS machines in the 2013 polls, “it is too late for IT experts to test the software in time for Monday’s balloting. Such testing usually takes at least 4 to 6 months.”

The UNA secretary-general said, “Add to that the more traditional ways of influencing local leaders and voters, and tampering with the ballot, and you have a recipe for disastrous elections.”

Other motives by Aquino lieutenants

In an interview earlier Thursday, Aquino assured the public that he has no intentions of delaying the polls, and continues to push for honest elections.

Tiangco said that while Aquino’s integrity provides hope, the motives of some individuals and groups around him are worrisome.

“What worries the public are the less-than-honest characters around him who have a different agenda, and who have been schooled in the art of election rigging…. They are capable of peddling the lie that what they are doing is for his party.”

Tiangco warned against vote shaving in areas where UNA is strong and vote padding in administration bailiwicks.

“This may not happen, but we can never underestimate the venality of those who have lofty ambitions and whose loyalty are not with the President but with themselves alone,” Tiangco said.

He called on Aquino to take action.

“He can discern the motives of his lieutenants, be wise to their platitudes and maneuverings, and crack the whip to make them toe the straight line.”

This is not the first time UNA has warned against election cheating.

Even in the 2010 polls, former President Joseph Estrada’s camp pointed to problems with the use of CF cards. Yet the group of Interior Secretary Mar Roxas also cited CF card issues as it questioned the victory of Vice President Jejomar Binay.

Estrada is pushing to make election cheating a heinous crime.

The former President said earlier this year, “It’s oppressing the will of the people so this is the challenge to the President, especially with the PCOS machine, baka ma-hocus PCOS.” – Rappler.com