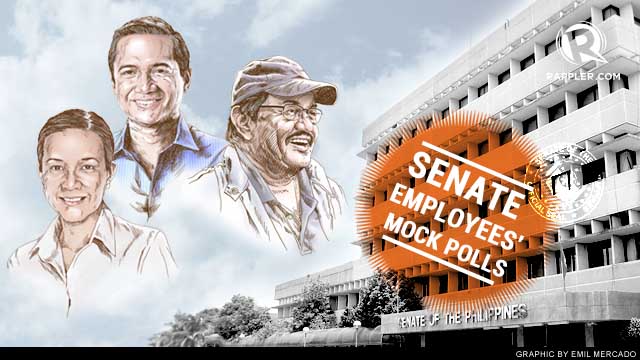 MANILA, Philippines – If it is entirely up to them, Senate employees would want to work with these 3 “new faces” by June: new Puerto Princesa Mayor Edward Hagedorn, former censors chief Grace Poe, and Bayan Muna Rep. Teddy Casiño.

And if given a choice, among the 6 re-electionist senators, they’d rather only work again with Senators Gregorio Honasan II, Loren Legarda, and Aquilino Pimentel III.

They also would like to see 3 former senators back at the chamber: Migz Zubiri, Richard Gordon, and Ramon Magsaysay Jr.

Based on a mock poll conducted by the Senate union and other employees on Wednesday, May 8, Hagedorn, Poe, and Casiño landed in the top 12 choices. Of the 1,618 registered voters working in the Senate, 854 participated.

Others in the Senate employees’ preferred list are 3 former senators seeking a comeback and scions of incumbent senators.

The Senate mock poll is considered a good gauge on the likability or popularity of a senatorial candidate, especially for those who are seeking re-election or aiming a comeback. “We get to work with them, see them in action, up close and personal,” one Senate employee said. “We get to see their personal side, not only the public persona.”

Immediate relatives of incumbent senators are not considered "fresh" faces in the strict sense, since they are extensions of their parents or siblings who have served or are currently serving in the Senate

Topping the mock poll were:

Except for Hagedorn, the rest of the top 6 choices of the Senate employees are slugging it out for the last 3 spots (10th, 11th and 12th) , based on the latest pre-election survey of the Social Weather Stations.

Rounding up the Magic 12 circle were:

If at all, the results of the mock poll also indicate where the sympathies of Senate employees went in the recent power struggle in the Senate leadership. Just before the election campaign heated up, Senate President Juan Ponce Enrile had to parry alleged leadership takeover by those disgruntled with his leadership.

Cayetano and Trillanes are among Enrile’s harshest critics. Escudero, on the other hand, voted with the majority to retain Enrile as president when the chamber was divided into two houses for his removal.

Enrile's son Jack obviously benefited from the sympathy votes. Unlike past Senate presidents, the Enrile patriarch is known to be generous with bonuses for Senate employees. – Rappler.com