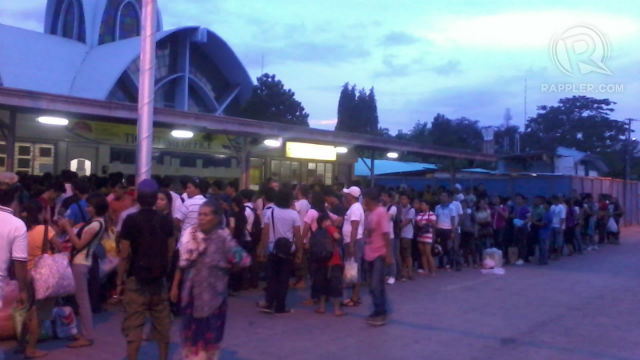 LONG LINES. At least a thousand passengers are outside the Cebu Port waiting for their ride home. Photo by James Salomon

MANILA, Philippines – Thousands of passengers heading home to cast their votes in their respective provinces flocked to transportation terminals in Metro Manila ahead of the May 13 elections.

Dagupan Bus Co. also said the number of passengers who scrambled to find a ride in their terminal started to increase as early Friday, May 10.

By sea and air

At least a thousand passengers left the port of Cebu for Leyte, Cagayan De Oro, Misamis Occidental and Bohol, while the port in Batangas experienced a rise in passenger volume on Saturday, May 11.

Meanwhile, the passenger assistance office of the Ninoy Aquino International Airport (NAIA) domestic terminal reported a slightly heavy flow of travellers, noting that the trend will increase by Sunday morning, May 12.

On social media, Rappler started a conversation on how far voters are willing to go for their country. Twitter users responded they would literally cross regions just to do their part in nation-building.