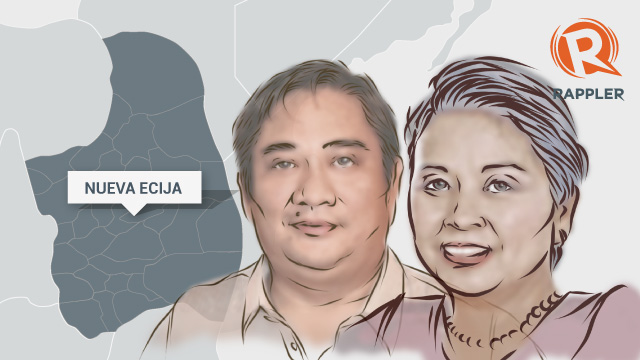 NUEVA ECIJA, Philippines - It has been half a decade of political rivalry between two familiar family names in the province: Umali and the Josons.

As of 5:24 AM with 52% of the election returns transmitted nationwide, Rappler's early results shows Umali with a lead of 148,705 votes over Josie Joson.

Josie's brother-in-law, ex-Gov Tomas Joson III, headed the province from 1992-1995. Charged with murder and detained in Camp Crame, Tomas III ran for the gubernatorial post yet again in 1998. He served as three-term governor thereafter, relinquishing his post in 2007.

Josie's husband, Former Vice Gov Mariano Cristino Joson, is the incumbent mayor of Quezon town and is running as 1st district representative for 2013.

Tensions between Umali and the Josons started in 2007 when Umali beat Mariano Cristino in the gubernatorial race. His victory effectively ended the 5-decade rule of the Josons in the province.

When Umali ran for re-election in 2010, he won over Tomas III's eldest son, Edward Thomas Joson. This 2013, Umali seeks to defeat a female Joson, as Josie tries to redeem her husband's loss over Umali in 2007.

Even before the second-generation Josons started running in various elective posts, the patriarch Joson was already governor of the province.

With over 1.3 million voters, Nueva Ecija is a major player especially in the delivery of votes for national candidates in the 2013 polls.

Nueva Ecija is one of 4 provinces tagged as an election hot spot for 4 consecutive elections now. Data from the Philippine National Police cites 3 cases of shooting related to the elections in 2010.

In 2009, the province received P1.2 million in Internal Revenue Allotment, the 10th highest in the country.

Former Gov Tomas Joson III filed a series of graft charges against Umali last April. The latest of which accused Umali of approving the province's purchase of allegedly overpriced second-hand heavy equipment from a private supplier.

In the same 10-page complaint-affidavit filed by Tomas III, Umali was also accused of favoring the winning company over more qualified suppliers for the bid. Eighteen graft charges are filed against him before the Office of the Ombudsman. - Rappler.com