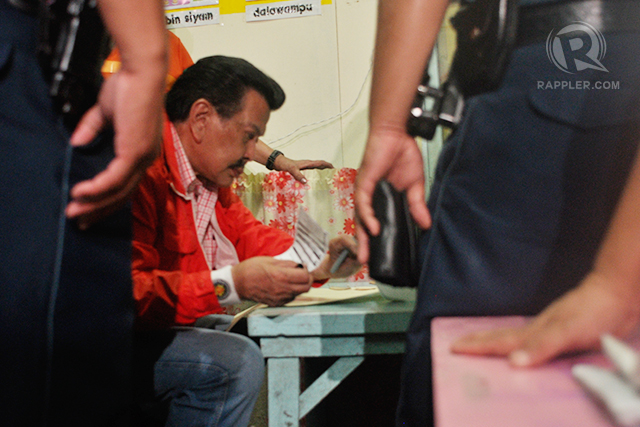 MANILA, Philippines (UPDATED) - He called his mayoral bid in Manila, his birthplace, the last great performance of his life. Past midnight of election day, former President Joseph "Erap" Estrada was set to assume his new role.

With 95.79% of the votes officially canvassed, Estrada of the Pwersa ng Masang Pilipino was leading re-electionist Mayor Alfredo Lim of the Liberal Party (LP)by 33,409 votes.

LP's legal counsels, however, was blocking Estrada's proclamation, saying that 4% of the votes have yet to be canvassed. They said every vote should be canvassed before the election officers could officially proclaim a winner.

Estrada's proclamation as the new mayor of Manila will put a cap on a campaign that has resorted to very personal attacks between the rivals.

Things were not always bitter between Estrada and Lim, however. While they were rivals in a 10-way presidential contest in 1998, the two become political allies -- Estrada appointed Lim as his interior secretary, and later endorsed his senatorial bid in 2004, and later his bid to return as Manila mayor on 2007.

Their relationship fell apart after Lim reportedly reneged on promises he made to Estrada in exchange for the former president's support.

VIEW:
When Dirty Harry meets Asiong Salonga
Cops and robbers: The battle for Manila
Erap vs Lim: Who's the better candidate?

Estrada, on the other hand, started out as mayor of San Juan in 1969 and occupied the post until 1986. He went on to become senator in 1987, vice president in 1992, and president in 1998. He was removed from the presidency in January 2001 in an elite-led revolt that the international community frowned upon as an attack on democracy.

He was convicted of plunder for which he spent more than 6 years in prison, but was immediately forgiven by former president Gloria Arroyo. He placed second when he ran for the precidency in the 2010 polls, which President Benigno Aquino III won. - with reports from Jerald Uy/Rappler.com