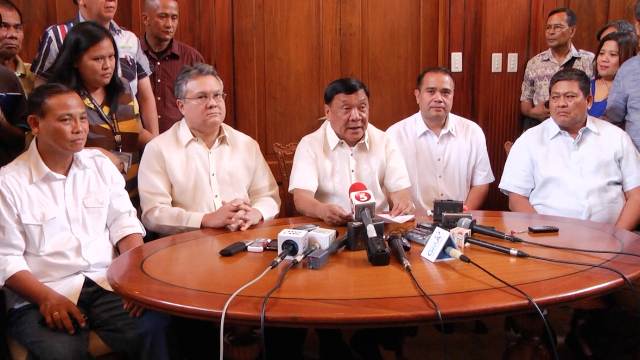 LINGAYEN, Pangasinan - The Pangasinan provincial board of canvassers adjourned Friday night, May 17, after completing the canvassing of results from 44 towns and 4 cities.

NPC also won in 4 of the total 6 legislative districts and in 33 of the 48 mayoral races. Re-elected Rep Gina De Venecia would have been the 5th NPC to win a House seat but she jumped over to Braganza's camp during the campaign. The other LP House member is Baby Arenas.

NPC walloped LP in Pangasinan but the local stalwarts of the President's political party said the battle is not over. Carmela Fonbuena reports.

The Nationalist People's Coalition shows force in battleground Pangasinan proving to Malacañang that this vote-rich province is and will remain its territory.

NPC sweeps the elections. It keeps the Capitol. It takes 4 out of 6 legislative districts and mayoral races.

It was a heated gubernatorial race that rocked the coalition between LP and NPC at the national level.

The NPC says Braganza and the LP used government machinery to make him win.

It was made clear from the very beginning that as far as Pangasinan is concerned, there is no coalition in the local level.... There were a lot of issues in Pangasinan. We cannot just close our eyes.

Now that the elections are over, Espino said he is ready to forgive and forget.

We are very open to reconciliation to everybody, kalimutan na natin pagtutungali nitong election.

But Cojuangco made a distinction between the President and his party.

The result of the 2013 polls may be embarrassing for the Liberal Party, but more and more it is looking like a calculated risk.

We're happy we have gained higher foothold in many municipalities in the province. Our number has increased.

By all indications, the coalition between the Liberal Party and the United Nationalist Alliance will stay. But it is temporary. 2016 will come and both parties will draw the line yet again in battleground Pangasinan. - Rappler.com