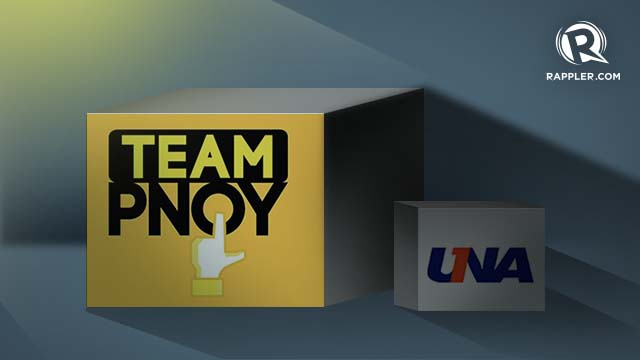 MANILA, Philippines – Team PNoy bets are trouncing their rivals in the 10 most vote-rich provinces, in what is now an emerging trend based on early tallies.

Combined, these vote-rich provinces have 16 million registered voters, a third of the country's 52 million.

Outside the National Capital Region, Cebu has the highest number of registered voters: 2.5 million.

Among the UNA candidates, Binay, JV Ejercito, son of former President and Manila mayor-elect Joseph Estrada, and re-electionist Sen Gregorio Honasan were among the top 12 most-voted bets in the 10 most vote-rich provinces. Former senator Richard Gordon was closely trailing them.

Other senatorial bets making a strong showing in the vote-rich provinces are: 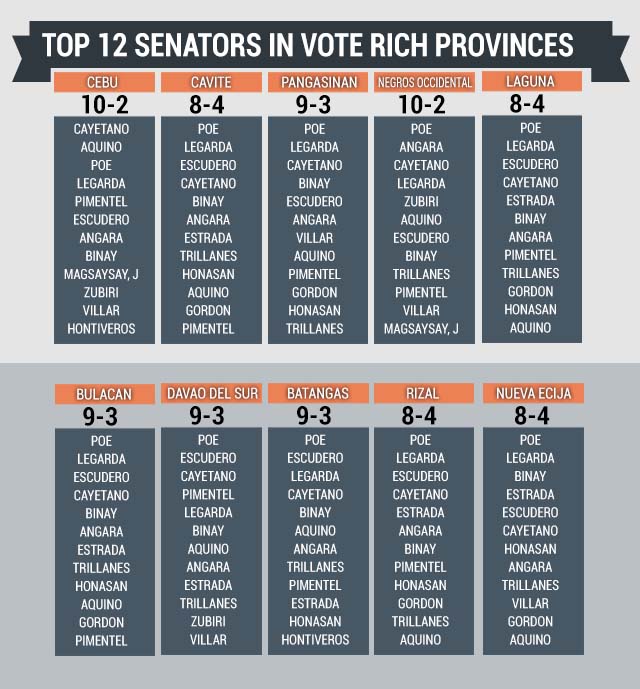 The results of the senatorial race in these provinces reveal some interesting insights.

Despite the influence of the Garcia political clan, that has controlled local politics in Cebu for the past 18 years, the province proved to be an Aquino stronghold.

Aquino and running mate Mar Roxas won in Cebu in 2010 with 980,000 and 1 million votes, respectively, through the backing of the local Bando Osmeña Pundok Kauswagan.

The province has been the source of opposition concern following the suspension last year of Gov Gwen Garcia, a member of UNA. The administration groomed Hilario Davide III from the Liberal Party to take over Garcia's post. Based on initial and unofficial results, Davide is poised to become the new governor of Cebu.

Cavite, Batangas, Laguna and Rizal, the 4 vote-rich provinces under Region IV-A, went for Aquino and Binay in the 2010 presidential elections, but this year they showed that they are more for Aquino than Binay as more Team PNoy candidates dominated the top 12 slots.

Except for Batangas, where Team PNoy senatorial bets led by 9-3, Cavite, Laguna and Rizal voted in favor of Team PNoy, 8-4.

The Team PNoy candidates’ strong showing in Laguna and Cavite came about despite the fact that the incumbent governors in these provinces belong to UNA.

Laguna Gov and re-electionist ER Ejercito campaigned for his UNA partymates in Laguna, where he is running against LP member Edgar San Luis. In Cavite, incumbent Gov Jonvic Remulla ran against the Liberal Party's Erineo "Ayong" Maliksi. Remulla is overwhemlingly leading in polls as of posting time. - Rappler.com