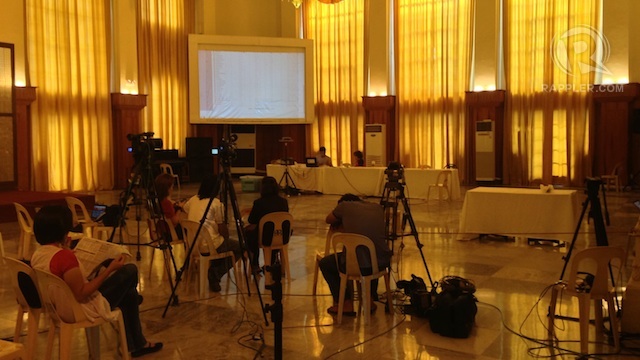 EMPTY CHAIRS, EMPTY TABLES. Media wait for the canvassing of votes at the Cebu Provincial Capitol Tuesday, May 14. Rappler/Ayee Macaraig

CEBU CITY, Philippines (UPDATE) - It is unclear when the 2013 mid-term election results for Cebu province will be known, as busted CF cards and transmission problems are delaying the canvassing on Tuesday, May 14.

Rappler learned that as of 10:50 am, the Provincial Board of Canvassers had only received returns from 24 out of 51 cities and municipalities.

Lambino said the approximated voter turnout for Cebu province is 85% "due to a lot of factors, first is the cleansing of the voters' list." In 2010, the turnout was 79% to 80% for the whole Central Visayas.

In the gubernatorial race, based on a partial, unofficial count, Liberal Party (LP) candidate Hilario Davide III is winning and seems set to end the Garcia family's 18-year hold on the vote-rich province.

The figures are based on partial, unofficial results electronically sourced from the Commission on Election’s Transparency Server via the Rappler Mirror Server.

If Davide is able to maintain his lead in the final, official count, it will be the first time in 18 years that a governor is elected outside of the Garcia family.

Davide is the son of former Chief Justice Hilario Davide Jr, and the LP provincial chairman for Cebu.

Cebu has 2.5 million voters, including Cebu City, Lapu-Lapu City and highly-urbanized cities. It is the country’s most vote-rich province.

His running mate, Roxas, also won against Binay in Cebu.

He was proclaimed winner of the mayoral race by the city board of canvassers late Tuesday. Based on partial but official results obtained by Sun Star Cebu, Rama has 211,753 votes as of Tuesday, 7:12 am. Osmeña is behind with 205,080 votes.

Rama gave Osmeña his first electoral defeat. The two used to be allies and partymates but had a falling out. Since then Osmeña -- a member of the influential clan that has led the city for about a century -- has criticized Rama's leadership.

Former Rep Raul Del Mar is heading for a landslide victory over Annabelle Rama with 132,798 votes to 35,473, again based on partial but official results as of 7:12 am. A longtime lawmaker, Del Mar is a member of another powerful Cebu political family.

In the province's 3rd district, suspended Gov Gwen Garcia is leading with 88,695 votes over the LP's Geraldine Yapha with 83,039 votes, based on partial, unofficial results as of 10:05 am.

Should Garcia win, she will replace her brother. Gwen Garcia was governor of Cebu for 9 years prior to her suspension in December 2012.

Garcia's father, Rep Pabling Garcia, is losing to LP candidate Willy Caminero, who has 77,458 votes over Garcia's 70,316 in the province's 2nd district.

Pabling Garcia is an ally of former President Gloria Macapagal-Arroyo.

In the 6th district, it looks like former Tourism Secretary Ace Durano, a scion of the influential Durano clan, will return to the House of Representatives as he is leading his opponents by over 100,000 votes.

Of Cebu's 6 congressional districts, the Liberal Party is leading in 3.