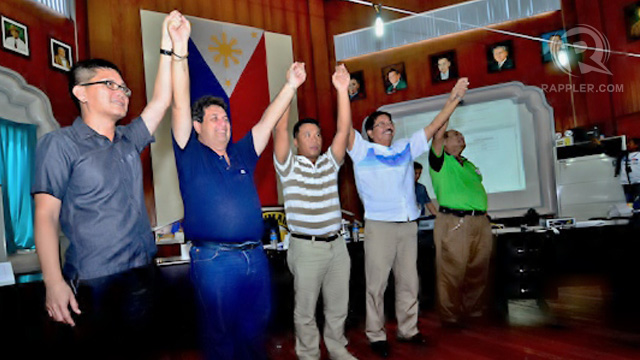 WINNERS. Mayor Manuel Sagarbarria and Woodrow Maquiling Sr. with Board of Canvasser Chairman Jerome Brilliantes raise their arms for the win. Photo by Romualdo Señeris II

DUMAGUETE CITY, Philippines - At 1:30 pm on Tuesday, May 14, the City Board of Canvassers proclaimed Manuel Chiquiting Sagarbarria as mayor of Dumaguete.

Sagarbarria is from the Nationalist People's Coalition (NPC). Former rival but current running mate, Woodrow Maquiling Sr, and 5 city councilors from the NPC were officially proclaimed as well.

Cordova was vice-mayor, and became part of the official mayoral ticket with the endorsement of PNoy and gubernatorial candidate Josy Limkaichong.

At the proclamation, Sagarbarria said, “I am happy and honored that the City of Gentle People gave me another 36 months to serve them.”

He won in all 30 barangays. Dumaguete City has a total of 73,270 registered voters.

The official turnout in Dumaguete based on the 90 precincts canvassed is 79.43%, which is higher than previous elections.

The PCOS machine at Cadawinonan still awaits its emergency CF card from Manila as the main card was corrupted. - with reports from Rappler Ambassador Therene Quijano/ Rappler.com