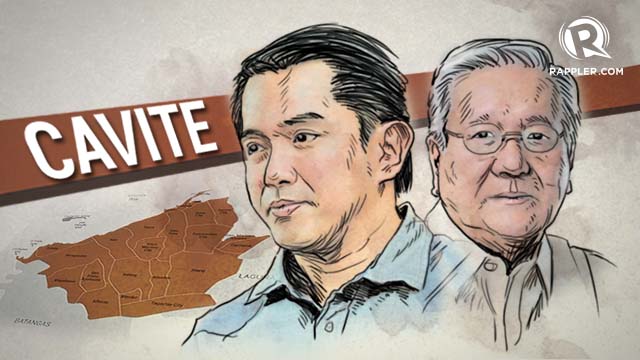 CAVITE, Philippines - Incumbent governor of Cavite Jonvic Remulla said he smelled victory as early as 8:30 pm Monday but his proclamation, which he earlier expected to take place Tuesday afternoon, May 14, will have to wait.

Here in Trece Martires at the provincial capitol, poll watchers and volunteers continue to wait for the transmission of results from 7 municipalities and cities, including vote-rich areas.

Because of corrupted memory cards and dysfunctional CF cards, places that have yet to successfully transmit their results include Alfonso, Tagaytay City, and Tanza, as well as vote-rich Dasmariñas, Gen Mariano Alvarez, Rosario, and Silang.

Thus officials say Remulla won't be proclaimed until Wednesday, May 15.

But Remulla's rival and Liberal Party candidate 3rd Rep Ireneo "Ayong" Maliksi already extended a hand of reconciliation: "For the peace and order of our province, we set aside our divisive political battle and I offer my hand to welcome Gov. Jonvic Remulla."

President Aquino badly wanted the 77-year-old Maliksi to win; he visited the province thrice to campaign for him.

He attributed the wide margin to undecided voters.

"I believe all the undecided shifted towards me in the last week. We had a 15% undecided rate leading up to the elections. I think 10-12% shifted towards me," he told Rappler. "I think it was my explanation of the issues because they threw a lot of black propaganda at me. I explained none of them were true and it came back, the votes came back."

Remulla's confidence stems from several small, unexpected triumphs. He said when the results started coming in, he expected huge losses in certain areas - but this didn't happen.

Leading up to the elections, Cavite's gubernatorial race was expected to be one of the hottest in the country. The campaign was not only characterized by potshots, it also pitted the well-entrenched clans of the Remullas and the Revillas -- Remulla's running mate is Sen Bong Revilla's son Jolo -- against the administration's bets Maliksi and Sen Ping Lacson's son, Jay.

Cavite is the country's second richest province in the country in terms of votes, with 1.79 million registered voters.

Remulla also expressed joy over the victory of his vice gubernatorial bet Jolo Revilla. Both are members of Lakas.

"Once I knew our victory was sure, once I knew Jolo had won, I was there at their house around 10pm to say thank you. Very early, he has been leading by 30-40% in surveys so that was a no-brainer. But we're a team. We wanted to win together and I'm happy we won together," he said.

But while the tandem has done well, the same cannot be said for Remullas' other brothers who are trailing in the polls.

His brothers incumbent Rep Jesus “Boying” Remulla is a mayoral candidate in Tagaytay City while former broadcaster Gilbert Remulla is running for Congress. The two are not likely to win, based on partial results.

What does this show?

"It just goes to prove there is no real franchise in politics. It takes a lot of hard work and it takes a lot of determination. And the dynasty issue is not relevant to us. As we said, it goes to prove people in Cavite are free to choose who they want. They're free to choose who they want and they didn't think my brothers were worthy this time but I'm sure they'll be back," he said.

Going into his second term, Remulla told Rappler his main focus this time around would be housing.

He said he also plans to reach out to Maliksi after he is proclaimed, something he has been doing since 2010. Maliksi, 77, a former three-term governor before he ran and won for Congress, first came into power because of the mentorship of Jonvic's father, former Cavite governor Juanito "Johnny" Remulla. - Rappler.com