UNA to Comelec: Why was election file deleted? 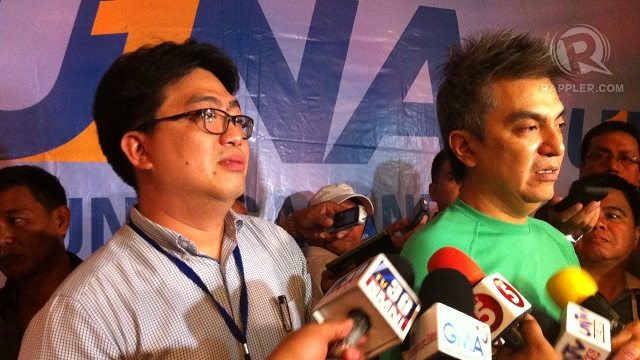 EXPLAIN PROCESS. UNA IT consultant Gadburt Mercado (left) and campaign manager Toby Tiangco ask the Comelec to explain who has access to its data after a Smartmatic personnel supposedly "inadvertently deleted" an election file. Photo by Rappler/Ayee Macaraig

MANILA, Philippines (UPDATED) – Who has access to election data? Why is the poll body changing the election process on the fly? Why was an election file “inadvertently deleted?”

The opposition United Nationalist Alliance (UNA) called on the Commission on Elections to answer these questions after discovering that a Smartmatic personnel “inadvertently deleted” an election file.

In a press conference on Thursday, May 16, UNA campaign manager Navotas Rep Tobias “Toby” Tiangco presented the coalition’s IT consultant Gadburt Mercado who found out about the supposed deletion of what he called a “regional file.”

Mercado said the regional file is one of two types of files that the Comelec sends the dominant political parties. He described it as an “aggregation file” of party list and senatorial results.

The UNA IT consultant said that on Tuesday, May 14, he noticed that the regional file stopped updating at 2:43 am. At 6:21 pm of the same day, he said UNA stopped receiving the regional file. He said that while the file was not necessary for the actual count, the intervention in the process was worrisome.

“Now, we asked the Comelec for a reason why there is a change in what they are sending us and the explanation they provided to us later in the day was that Smartmatic conducted some ‘routine maintenance’ and the file, the regional file in question was inadvertently ‘deleted, removed, stopped.’ I’m using the words they (Comelec) provided us,” Mercado said.

Mercado said that according to the Comelec, Smartmatic’s Database Analyst, a certain Cerino “Rene” Datoy, admitted to having “inadvertently activated a program in the server that deleted the file.” (see Mercado's full affidavit below)

Mercado said UNA also wants to find out what other changes Comelec implemented, and if the maintenance was scheduled.

“We were requesting for the audit logs of the computers to verify what’s going on. We’re not drawing any conclusions so we know certain files ceased transmission and we want to know why all of a sudden there are changes in what they’re sending us.”

Tiangco said the supposed intervention was a cause for concern.

“The reason we went PCOS (precinct count optical scan machines) is to limit human intervention so what else can be done with this system if there is intervention?”

The UNA campaign manager also said it was worrying that Comelec did not disclose the supposed deletion of the file. He said had UNA not asked about it, the public would not have known.

UNA clarified that it was not alleging irregularity but called on the Comelec to explain and investigate.

Mercado said, “What we’re asking is what’s your process? What are your internal controls?”

The Comelec though addressed UNA’s concerns.

Why UNA is against partial proclamation

Tiangco also explained why UNA filed a manifestation with motion to postpone the proclamation of senatorial candidates. On Thursday afternoon, the Comelec denied UNA's motion. (See document below)

The UNA campaign manager said the alliance is against a partial proclamation, with only about 76% of election data being transmitted as of Thursday morning.

Tiangco said compared to 2010 where 80% of results were transmitted 5 hours after polls closed, transmission barely moved from May 14 to 15.

“When I was invited to guest on Rappler, they showed me the graph that at 69% [transmission] on May 14, ARMM (Autonomous Region in Muslim Mindanao) had transmitted less than 20% of results so that is worrying because we all know the reputation of ARMM,” Tiangco said in reference to the so-called cheating capital of the Philippines.

Asked why delay the proclamation of top senatorial bets if the remaining results will not affect their lead, Tiangco said UNA just wants Comelec to be consistent.

“How come for local candidates, they want 100% of the results in? In Navotas, we had to wait for just 3 precincts until 3 am even if my lead was big. How come in the senatorial race, they won’t wait?”

The UNA secretary-general said the alliance was willing to defer the proclamation of its own candidate, Nancy Binay, just to ensure the credibility of the process. He said there are still 8 to 9 million votes at stake.

“Eight million votes, isn’t that important? That’s a big chunk. That’s 8 to 9 million votes we’re talking about here. They should just speed up the transmission so we can proclaim all 12 senators.”

It is the canvassed results that will be used as basis to proclaim winning candidates.

The Comelec explained its decision to reject UNA's motion.

In 2010 it took two days to start canvassing, and five days for the first set of senators to be proclaimed. So current rate is faster #fyi

Tiangco also questioned the Comelec’s decision asking the media not to publish results from the Transparency Server once it has begun proclaiming senators.

“What is wrong with the Transparency count,” Tiangco asked. “The Transparency Server is supposed to be a check of official results. The credibility of the elections is important.”

“The Transparency Server is for voter confidence, for the credibility of the elections, and to see what we can improve on in 2016.” – Rappler.com