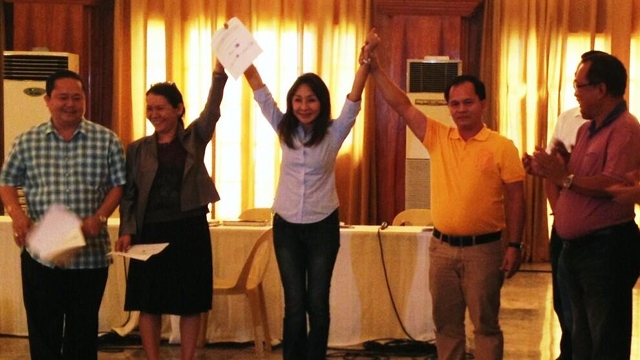 MANILA, Philippines – After 9 years as Cebu governor and a 6-month suspension, Gwendolyn “Gwen” Garcia is now officially a congresswoman.

Garcia was proclaimed representative of the 3rd district of Cebu on Thursday, May 16, putting her back in power after Malacañang suspended her for grave abuse of authority last December.

Garcia told reporters, “This is the most difficult political battle I faced.”

Accompanying Garcia during her proclamation in the Cebu capitol were daughter, lawyer Christina Garcia-Frasco, and son-in-law Liloan Mayor Duke Frasco.

Other members of the Garcia family are not faring as well as Gwen.

Besides Pablo John, their father 2nd District Rep Pablo “Pabling” Garcia was behind LP’s Willy Caminero in his re-election bid, based on partial, unofficial results via the Rappler Mirror Server. Caminero is leading with 84,151 votes while the elder Garcia has 77,190 as of 3:46 pm of Thursday.

A stalwart of the local One Cebu party, Gwen is a member of Vice President Jejomar Binay’s United Nationalist Alliance (UNA) and was initially drafted to be one of its senatorial bets.

In December, the Office of the President suspended her for 6 months for bypassing the office of the vice governor and the provincial council in hiring contractual employees.

The Garcias slammed the suspension as a power grab meant to pave the way for LP president-on-leave Mar Roxas’ 2016 presidential bid. Malacañang though said the ruling followed due process.

Besides the administrative case, Gwen also faces a graft case before the Sandiganbayan over the provincial government’s allegedly anomalous purchase of the Balili Estate for P98.9 million in 2008, which the Office of the Ombudsman found to be mostly underwater.

Garcia pleaded not guilty to the charge in March.

While Garcia won the 3rd district, LP candidates are leading in the congressional races in 3 out of the province’s 6 districts. – Rappler.com