6 senators proclaimed based on 24% of COCs 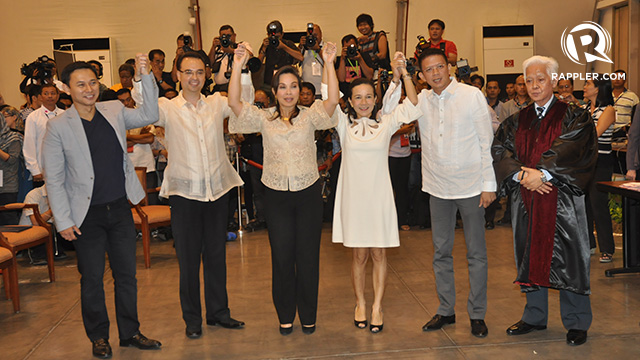 MANILA, Philippines (5th UPDATE) - Election commissioners, sitting as the national board of canvassers (NBOC), proclaimed on Thursday evening, May 16, the 6 candidates whose victories, they said, were guaranteed even if 76% of vote certificates have yet to be canvassed.

Proclaimed – based on 72 certificates of canvass (COCs) out of 301 – were 3 neophytes and 3 re-electionists.

Commission on Elections (Comelec) chair Sixto Brillantes Jr explained that the 72 COCs were "sufficient to declare 50%" of winners. He said about 200 of all COCs, in the first place, come from overseas absentee voters, giving the impression that most, if not all, of the 72 COCs canvassed were from the provinces and cities.

Based on the Comelec's call to push through with the proclamation, the Senate newcomers are former censors chief Grace Poe, assistant to the Vice President Nancy Binay, and former Aurora congressman Juan Edgardo "Sonny" Angara, son of a senator. The re-electionists are Loren Legarda, Francis "Chiz" Escudero, and Alan Peter Cayetano.

Based on the NBOC's latest count, as of 5:09 pm of Thursday, the top 6 senators have so far garnered the following number of votes:

As of 7:40 pm, when the ceremony began, Binay and Cayetano were not at the Philippine International Convention Center, where the proclamation was held. Cayetano arrived late, just when his name was mentioned.

Brillantes said Binay was "technically" proclaimed as senator despite her absence. The basis for this was the certificate of proclamation that the Comelec commissioners signed, he added. (Watch more in the video below.)

Binay's decision was apparently based on her coalition's protest against an early proclamation when more than 11 million votes have yet to be transmitted from vote machines all over the country to the Comelec's server in Manila.

Proclamations, however, are made based on the official and manual review of COCs receipt from local boards of canvassers.

On Wednesday, May 15, UNA requested to suspend the proclamation but was denied by the poll body Thursday.

Team PNoy, on the other hand, expressed concern on the delayed transmission, saying it "could have an impact on the perception on what has so far been a smooth and orderly election."

Brillantes said the proclamation was arranged alphabetically and not according to the candidates' ranking in the race.