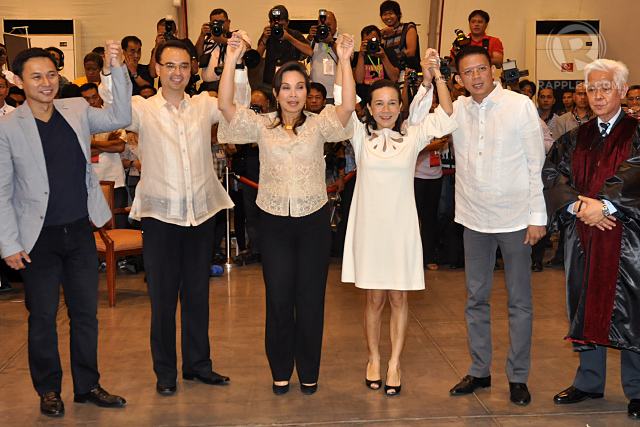 MOVING ON? Sen Alan Peter Cayetano and Sen Loren Legarda dismiss their campaign spat, saying they have moved on. Photo by Arcel Cometa/Rappler

MANILA, Philippines – They kissed each other on the cheek and raised each other’s hand. Is all finally well between Senators Alan Peter Cayetano and Loren Legarda?

The re-electionist senators appeared to have reconciled during the proclamation of the top 6 senatorial bets on Thursday, May 16, at the Philippine International Convention Center (PICC).

The two stood beside each other as the winning senators posed for the traditional photo-op. Yet there was more that happened behind the scenes.

“I went up to her. She greeted me very warmly. I said, ‘Mag-usap tayo' kasi magkikita naman kami every day sa Senate,” Cayetano said in an interview after the proclamation. (Let’s talk because we’ll see each other every day in the Senate.)

During the last weeks of the campaign, Legarda accused a publicist associated with Cayetano of orchestrating a media campaign to pull down her numbers. Lawyer Louis Biraogo accused her of failing to accurately declare a posh New York condominium.

Legarda branded it as black propaganda and hinted that Cayetano was behind the smear campaign. The lady senator was also emotional during Team PNoy’s miting de avance, apparently still smarting from her spat with Cayetano.

Yet after the proclamation, the Senate Minority Leader said he never felt the need to explain.

“I never felt alluded to with her accusations. We never had a problem. We just did not see each other. Now that the campaign is over, I said we should talk.”

Cayetano added, “Siguro lang dala ng emosyon during the campaign at marami ring naninira, nang-iintriga, pero I never considered may rift 'di lang sa Team PNoy, pati ang mga kaibigan ko sa UNA.” (Maybe it was just because of strong emotions during the campaign and many were attacking us, sowing intrigues, but I never considered there was a rift in Team PNoy and even with our friends in UNA.)

“Sabi ko huwag kayo mag-alala sa akin. Tatahimik ako alang-alang sa team at saka na tayo mag-usap, pero alam naman nila na ako, parating totoo ang sinasabi ko, 'di ako naniniwala sa black propaganda,” he said. (I said don’t worry about me. I will keep quiet for the sake of the team and let’s just talk after but they know that I am always speaking the truth and I do not believe in black propaganda.)

He added: “Maybe towards the end, my campaign was affected, but if we lost a little bit of votes, it was a worthwhile sacrifice because what is more important is the whole team. If I reacted, the whole team will suffer.”

Asked about Cayetano’s gesture during the proclamation, Legarda gave a short response.

“We already bussed each other on the cheek two times,” she told Rappler.

“I have moved on. It’s not intending to move on. I have already moved on. There will always be intrigues in life, not just in politics but family, in all professions.”

Initially battling for the first seat, Legarda and Cayetano emerged to rank second and third, respectively, with the unexpected rise of Grace Poe as the senatorial race’s frontrunner.

This is the first election that Legarda did not top after being number one in 1998 and 2007.

“I am very, very grateful. I am thanking the people for giving me the chance to be senator. It’s a huge opportunity to be number one in 1998, and again in 2007. That’s such a big blessing. I am grateful, so happy.”

“My only ambition as a child was to have a TV show and one award,” she added.

Cayetano also dismissed reports that he was out to top the race.

In his new term, Cayetano said he will focus on his campaign platform: lower prices of goods, income and jobs. “[We want] better education going into employment and how gasoline and oil prices can be kept low.”

As for Legarda, she will prioritize a “pantawid tuition” program to offer one college scholarship per family enrolled in the government’s Conditional Cash Transfer Program.

Looking ahead, Cayetano also said he expects a new Senate leadership in the 16th Congress.

The minority leader got into an ugly word war with Senate President Juan Ponce Enrile over the Senate fund controversy last January. Enrile is a stalwart of the opposition United Nationalist Alliance (UNA), which will likely win just 3 Senate seats based on the official and unofficial counts.

“I think [a new leadership] is inevitable because there’s a new coalition and the President will be looking for one of his party mates or allies to lead the Senate. It can be anyone.”

Cayetano described the composition of the new Senate as “very interesting.” He is part of the partnership among the Liberal Party, Nacionalista Party, and the Nationalist People’s Coalition under Team PNoy.

“I think the coalition will hold. People have great expectations, especially the President supported us so we have to meet that but there’s a good feeling of camaraderie. It’s also up to UNA how they will respond but I think they are our friends.”

Cayetano’s sister, Sen Pia Cayetano, accompanied her brother in the proclamation. She too said she expected a new leadership. Their brother, Lino Cayetano, was also present along with Sen Alan’s wife, re-elected Taguig Mayor Lani Cayetano.

“It’s clear the LP coalition has the majority in the senatorial slates so I think it’s a no-brainer to assume it’s going to be an LP-coalition-based Senate," said Sen Pia Cayetano. – Rappler.com