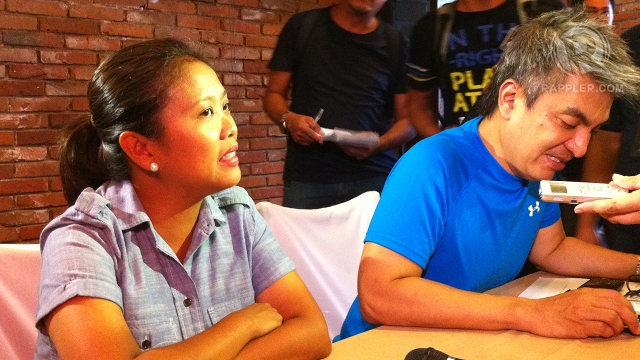 'JUST ASKING.' UNA says while it is not questioning the proclamation of the top 6 senatorial bets, it wants to know what was the basis for the move with only 24% of votes canvassed as of that time. Photo by Rappler/Ayee Macaraig

MANILA, Philippines – They are asking questions about it but will not question it for now.

The opposition United Nationalist Alliance (UNA) raised questions about the partial proclamation of 6 senatorial candidates but does not yet have any legal move planned to question it.

In a press conference on Friday, May 17, UNA campaign manager Navotas Rep Tobias “Toby” Tiangco and Senator-elect Nancy Binay asked why the National Board of Canvassers (NBOC) decided to push through with the proclamation when it had then canvassed only 23.68% of certificates of canvass (COC).

Tiangco asked, “If 75% of votes have not yet been canvassed, what is the basis to say it cannot affect the number of votes of the top 6? Who of the 6 candidates moved for an early proclamation when only 23.68% of votes were canvassed?”

The Comelec clarified on Friday that it used as basis the tallies that were faxed from the provinces. (Read: Comelec's defense: We used faxed tallies)

The UNA secretary-general though clarified that he was not “questioning” the proclamation but was only asking the Commission on Elections to explain.

“I believe in the good faith of the Comelec. I’m just asking them why and what was the basis. That’s all. I am not casting doubt on the Comelec,” Tiangco said.

Binay explained that she skipped the proclamation on Thursday, May 16, because her lawyers advised her that the votes canvassed was not yet substantial for a proclamation.

She was the only one among the top 6 who was absent, with the other candidates coming from the administration slate Team PNoy.

“According to my lawyers, 72 out of 304 COCs is not enough basis for proclamation. I just want a proclamation without any questions, without any shed of doubt. It’s more of my comfort level.”

She added, “’Di ko pa nakikita ang tunay na boses ng ating kababayan.” (I have not yet heard the true voice of our people.)

Asked about their legal moves, the two said they still do not have any planned. UNA filed a motion to suspend the partial proclamation but the poll body denied it and went ahead proclaiming the 6 Senate bets.

Tiangco said if it were up to him, he will just let the lawyers of the individual candidates pursue legal action.

Yet lawyers of some UNA candidates told Rappler that while they too object to the partial proclamation, they do not plan to question it for now.

‘You can’t do anything’

In a phone interview with Rappler, Macalintal called it a “defective proclamation” with only 23.68% of votes canvassed.

He objected to the proclamation before the NBOC on Thursday but he said the board did not act on his objection.

“It is a proclamation which has no force and effect and any candidate who received and used that certificate of proclamation is betraying the trust imposed upon them because the votes garnered was not indicated in the certificate. Accepting that is like turning their back on the voters,” he said.

He added, “There is no such thing as a partial proclamation with only 22% of votes canvassed.”

Macalintal though said only a resolution of the NBOC is needed for a candidate to be considered senator.

Garcia was also among the UNA lawyers who objected to the partial proclamation.

“I honestly believe it was not right because what should have happened is a full proclamation or at least have 70% to 80% of votes canvassed so you can see the pattern.”

“Yesterday, the number 1 senator, Grace Poe, only had 6 million votes in the official count. What was the basis of the proclamation, the Transparency Server, which is unofficial?”

Garcia said that the law states that there can only be a proclamation if the uncanvassed votes can no longer affect the final results.

“Definitely, with 77% of votes left uncanvassed, that will still affect the results of the elections. The PPCRV (Parish Pastoral Council for Responsible Voting) count is unofficial. If that was the basis, why then even have canvassing in Comelec?”

Like Tiangco, Garcia asked why the Comelec requires a bigger threshold of votes canvassed in the local level compared to the senatorial race. Tiangco had said that in his congressional bid in Navotas, he had to wait for 3 remaining precincts to transmit results even if the votes there will no longer affect his lead.

So what will they do about it?

Macalintal said, “Wala ka nang magagawa. ‘Di na nila babaguhin iyon.” (There’s nothing you can do. They won’t change that.)

Election lawyers also told Rappler that only the Senate Electoral Tribunal has jurisdiction over the issue.

Article IV, Section 17 of the Constitution states that, “The Senate and the House of Representatives … shall be the sole judge of all contests relating to the election, returns and qualifications of their respective Members.”

Macalintal said that as far as Honasan is concerned, there is no plan to question the proclamation for now.

Yet speaking independently of Honasan, he said any registered voter can go to the Supreme Court and “raise the issue of grave abuse of discretion by the NBOC.”

“Me, I will not question it. I don’t know about the UNA lawyers,” Macalintal said.

The High Court is currently in recess.

Garcia said he will still have to coordinate with the other UNA lawyers to plan their next move.

Garcia believes should legal action be taken, it should be the entire alliance and not individual senators that should pursue the case.

“It will be stronger if it is UNA as a party that will question it because if it is just individual candidates, it is like you are just after personal and vested interests. Even Nancy said in the press conference that there shouldn’t have been a proclamation,” Garcia said.

Tiangco has a different view.

“If UNA again files, they will say it is self-serving, sour-graping and politics again so if it were up to me, I leave it up to a third party like the watchdogs or the individual candidates to file.”

Instead, Tiangco said he is open to having a dialogue with the Comelec to discuss what can be improved on for the 2016 polls.

While Binay has been proclaimed, UNA's other candidates: Ejercito, Honasan, and former Sen Richard Gordon are still battling it out for the last slots. – Rappler.com