When Grace Poe found out she was number one 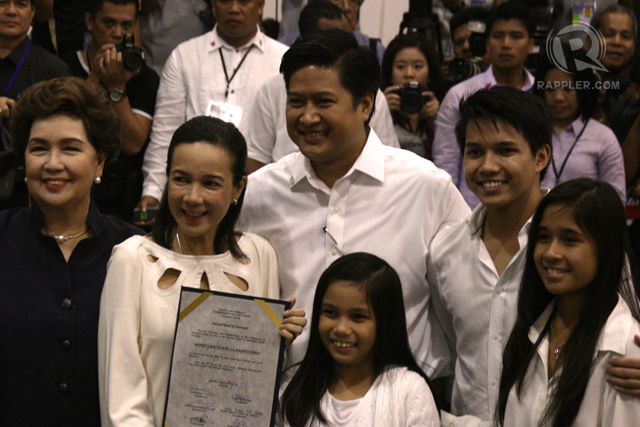 NUMBER ONE. Grace Poe came with her husband Neil Llamanzares, their children, as well as mother actress Susan Roces. Photo by Vincent Go/Rappler

It was where, 9 years earlier, they sat and watched the numbers of Grace's father, the late iconic actor Fernando Poe Jr, trail former Gloria Macapagal-Arroyo's, in an election widely believed to have been manipulated by the unpopular leader.

But in 2013, the mood in the room of FPJ's home, cornered by walls that had seen the agony of defeat of an election past, was dramatically different.

It was about 8 p.m. on election day, Monday, May 13, when the first batch of votes was counted. When the initial tallies came in, there was a surprise name atop the senatorial list, unexpected as it was sensible: Grace Poe.

Poe and her mother Susan Roces were beside themselves.

"My dad and I drove to Lola's house. We got to the room, opened the door, and saw my mom and grandma jumping for joy. The first 4,000 votes were in and my mom was number 1," Poe's son Brian told Rappler.

But the celebration simmered soon, after Poe asked for calm, reluctant to bank on a top finish based only on the first few thousand returns.

"My mom was happy and everything but she kept saying, 'Huy guys it's only the first 4,000! We can't say anything. Let's not expect anything,'" he said.

The numbers, however, did hold.

Brian, who stood as Poe's campaign coordinator, was getting numbers from various parts of the Philippines. Cities in Bohol, Davao, and far-off provinces were reporting the same result. Poe was number one.

Soon, Poe's cousins and other members of the Poe family joined Roces, Poe, Brian, and Poe's husband Neil. After the first couple of million votes trickled in, Poe stayed on top, a political neophyte over established political names and re-electionists.

Despite congratulatory greetings from the extended family present, and assurances the number one spot was hers for the taking, there was one person who could not believe the count.

The first politician to call to offer his congratulations just over an hour after the first tallies was Poe's best friend on the campaign trail, Sen Chiz Escudero. Poe attributes much of her success to the veteran politician, who took her under his wing, brought her with him to his sorties and rallies, and advised her thoroughly on her campaign. Escudero was FPJ's spokesperson in 2004.

The second call came past 10pm. The voice on the other end of the line was consistent topnotcher Loren Legarda.

Legarda, at that point and until her proclamation, stayed on the number 2 spot, right behind Poe. It is the first senatorial election Legarda did not finish number one, a surprise not even the surveys throughout the campaign saw coming. Legarda offered her congratulations.

Sen Jinggoy Estrada, the son of former President Joseph Estrada -- one of FPJ's best friends -- was the third to call.

The phone was ringing off the hook, with requests for interviews, all of which Poe shunned and attempted to delay as long as possible. "Huy hindi pa tapos, matagal pa 'to (Hey this isn't done yet, there's still a long way to go)," she would say throughout the evening.

Not everyone was as cautious.

Roces, who was by FPJ's side throughout his controversial defeat, remained poised and dignified, but she was "excited, emotional" for her daughter's lead.

"While the rest of us were trying to keep calm, [my grandma] was telling my mom, you won. This is more than winning, this is vindication that shows FPJ was really loved by the people," Brian said.

"That moment between my mom and grandmother, they realized, what we were fighting for in 2004… we were getting there."

That night, although emotionally drained from the elections, Poe got a mere 3 hours of sleep. The calls were non-stop.

By the morning, Poe agreed to her first media interview.

Poe has repeatedly said she did not expect a number 1 finish, and often prayed for a comfortable spot, somewhere in the middle, to avoid the stress of 11th or 12th place.

Even those closest to Poe predicted a lower rank.

"My son and I were making bets before the campaign started and he said, 'Mom will be number 8, and I said, 'No way, she'll at least be number 6,'" Neil Poe told Rappler.

"What God gave me was much more," Poe told media on Thursday, May 16, after she was proclaimed senator.

At the Philippine International Convention Center, where the proclamation took place, a beaming Poe received the loudest cheers, accompanied by her mother, husband, and 3 children.

"We were just blessed. I think there was a lot of divine intervention here," Poe said. "Sometimes, when you look closely at our team, it's like, [we do things that we're not supposed to be doing.]"

She admitted to feeling pressure after finishing first, and said she was looking forward to spending time with her children and going on a short vacation before the 16th Congress begins in July.

Brian said it was only at that moment when Poe finally accepted she topped the tight senatorial race.

The surprise among her camp, even after her official proclamation, was evident.

On the sidelines, Poe's famously private husband, Neil, tried to direct interviews to his son. Unseen on the campaign trail, Neil said his main responsibilities were behind the scenes, taking care of finances and media placements.

In explaining his wife's unexpected finish, Neil pointed to Poe's intelligence and appeal.

"She does her homework, she knows the issues. It does help that the cameras eat her up. She does look good on camera. I guess it's also the Poe magic. Her dad has a hand in this. The voters have realized it's not just the brand, the ads, but also if they actually saw her in debates that she has a good head on her shoulders," he said.

An executive at San Miguel Corp, Neil said he would continue his job to continue providing for his family, "since government doesn't pay that much."

"I'm gonna be the proud and supportive husband. When i started my career she supported me 100%. Now it's her turn. I intend to support her 100%," he said.

He looked straight at the camera only once throughout the interview. "I want to tell people out there...the people who voted for Grace, [that] she's gonna make you guys proud." - Rappler.com