Uncanvassed votes down to 3 million 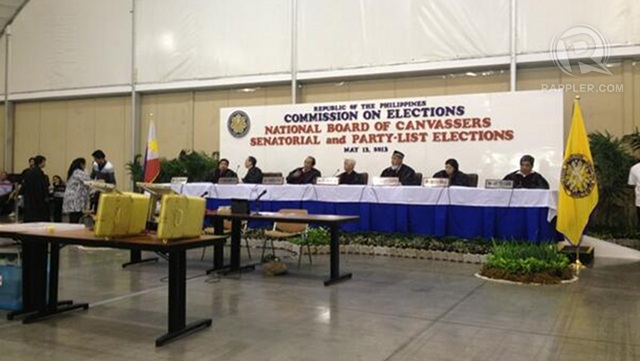 MANILA, Philippines (Updated) – As if to address initial questions over whether there was enough basis for proclaiming 9 senators, the National Board of Canvassers (NBOC) had its canvass going full steam as of Friday, May 17.

For the first time, the official canvass – based on election returns faxed from areas that were having electronic transmission problems – overtook the count of the Commission on Elections’ Transparency Server. The server had been receiving transmissions from precincts in trickles since Tuesday evening, May 14.

By early Friday evening, the board had tallied certificates of canvass (COCs) from 67 provinces, 23 cities, and 23 overseas absentee voting posts – including the 10 most vote-rich provinces.

In these same areas, ‪34.6 million voters (out of the 47.87 million registered voters) actually went to the polls – a 72% turnout. If the turnout rate holds, the remaining votes to be canvassed as of early evening of Friday stands at about 3 million.

Areas canvassed in the 11th canvass report, which was released by the poll body Friday evening, already included the vote-rich provinces, with the following voters’ population:

In contrast, in the unofficial tally of the Transparency Server – from which the Rappler Mirror Server sources its election results data – has received only 76% of total election returns so far.

These represent areas with a total 40.85 million registered voters, which had led to poll watchers and political camps to conclude that some 8 million votes were unaccounted.

The unofficial tally is based on the 3rd transmission each of the precinct count optical scan (PCOS) machines makes after precincts close on election day. Not every machine, however, was able to successfully transmit data successfully beyond their local consolidation centers (the local canvassing boards).

If the machines fail to transmit results electronically, election workers have the option to deliver the data manually to the canvassing centers as a contingency measure.

The top 12 senatorial candidates in the 11th canvass report were:

Check our tally of official senatorial votes per province

The top 6 senatorial candidates were proclaimed on Thursday, and 3 more on Friday.

At least two of the winning senators, however, skipped their proclamation to protest the rush with which the Comelec was proclaiming winners. Nancy Binay and Aquilino Pimentel III – both from PDP-Laban but who ran on opposing slates – said the poll body should canvass all the votes before naming the winners.

Comelec chair Sixto Brillantes Jr, however, was confident that they had enough votes as basis. He threatened to resign if, in the final tally, any of those who had been proclaimed would be dislodged from the 12 winners’ list. – Rappler.com