Koko to Migz: How about lunch? 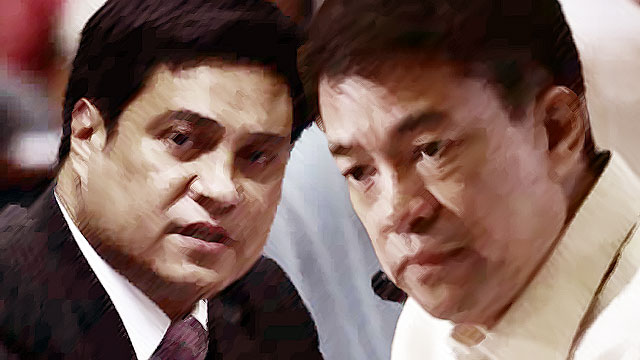 MANILA, Philippines - They were the most bitter of rivals for 6 years, no thanks to election fraud.

But now that one gets a clear, immediate victory, and the other loses but garners an untainted, respectable vote, it seems all is bound to end well between re-elected Senator Aquilino “Koko” Pimentel III and former Senator Miguel Zubiri.

On the night he was proclaimed Saturday, May 18, Pimentel said he wants to have lunch or dinner with Zubiri, who lost.

Zubiri won the 12th spot in the 2007 senatorial polls, the last manual elections. A protest filed by Pimentel later proved that Zubiri benefited from vote padding and shaving operations conducted by the Arroyo administration for some of its candidates. Zubiri resigned, and Pimentel got to serve the remaining 2 years of his term.

“Wala akong problema with Migz Zubiri and after everything has settled. I want to schedule a lunch or dinner with my friend, Migz Zubiri,” Pimentel told reporters in an interview.

Pimentel was proclaimed by the National Board of Canvassers (NBOC) Friday night, but he skipped the ceremony, saying it was pre-mature to make any proclamation until all votes had been canvassed. He attended the ceremony on Saturday, when the NBOC had tallied the certificates of canvass from all the provinces and cities.

Pimentel, who ran under the Team PNoy administration coalition, got 14.58 million votes and placed 8th in the official tally. Zubiri, meanwhile, placed 14th with 11.71 million votes.

“This will be my first time to be proclaimed by Comelec itself, so I’m happy. At least it’s a vindication of my cause, of my fight, and at the same time, redemption of Comelec. I mean, nagbago na rin ang image ng Comelec (Comele’s image has also changed),” he said.

During the campaign, Zubiri also divulged that Pimentel’s estranged wife, former beauty queen Jewel Mae Lobaton, had run to him for help, claiming she was a battered wife. Lobaton is Zubiri’s cousin.

Pimentel and Lobaton denied Zubiri’s accusation. Zubiri later apologized and admitted it was wrong for him to have come out with the issue.

Pimentel said Zubiri should just “try again” in the next elections.

“Well, si Migz should try again because he’s a fellow Mindanaoan. We need to add representatives, senators, from Mindanao so I encourage all those who failed in this elections to try again in some future date and time,” Pimentel said.

Pimentel and Zubiri are both from Northern Mindanao. In 2007, Zubiri topped the senatorial polls in 4 of the 5 provinces in the region, as well as in Cagayan de Oro City, where Pimentel ran for mayor and lost in 2004.

Meanwhile, Pimentel said his priority in the Senate will be seeking solutions to address the power crisis in Mindano and the drafting of the basic law on the Mindanao peace framework agreement. – Rappler.com