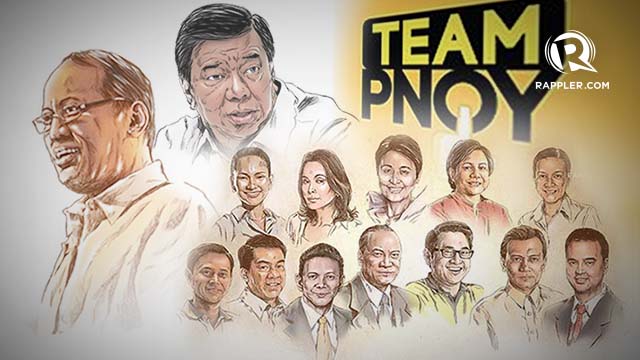 MANILA, Philippines - President Benigno Aquino III has a message for his handpicked bets who weren't as successful in their Senate bid: "Don't lose heart."

Team PNoy threw a thanksgiving party on Wednesday, May 22, to personally thank those who helped the administration ticket win 9-3 over opposition United Nationalist Alliance (UNA).

The President also took the opportunity to address the 3 candidates who failed to make it: former senators Jun Magsaysay and Jamby Madrigal, and former Akbayan Rep Risa Hontiveros.

"Team PNoy and millions and millions of Filipinos know your true abilities, and how much you wish to do and can do for the future of the country," the President said in his speech.

"Filipinos need people like you who are as willing to serve. I hope you will not lose heart," he added.

Aquino said he wishes that the desire of the 3 to lift the country will only intensify. He also gave assurances that in 2016, his tuwid na daan or "straight and narrow path" message will be even more powerful, suggesting that defeats will be unlikely then.

Hontiveros and Magsaysay were present at the victory party held at the historic Club Filipino. It was in the same room that Aquino proclaimed his 2013 senatorial slate about 8 months earlier. Madrigal did not attend the event.

Aquino said Team PNoy's victory started in 2010, when the Filipino people supported his presidency, a move which he said "became key to progress."

He asked the coalition to continue to work together and asked for "hard work and dedication," because their success "will depend on what we can do or prove in the next 3 years."

Aquino also asked the newly elected senators to "fulfill your promises" and "not waste this opportunity."

Members of the slate present – including Hontiveros and Magsaysay – also thanked those who backed their campaigns.

Hontiveros was greeted by loud cheers. In a good mood, she joked that she wasn't going to cry that night "lest her mascara go to waste."

"I'm one of 3 who lost a battle, but not the war," she said. She swore that, like the President, she would "keep applying [herself] faithfully to task."

"I promise [President Aquino] I'll stay as a countryman that will fight for his reforms," she said.

Magsaysay, also in high spirits on stage, said he was "relieved" the campaign was over. He recalled how he was always asked how a 74-year-old like him could finish a grueling 90-day campaign. "I'm here now," he said.

Magsaysay shrugged off his loss and told reporters that this was his "last hurrah" in politics.

"It happens. I've been there before," he said.

The 4 thanked their staff, the President for his support and endorsement, and campaign manager Franklin Drilon.

Pimentel also thanked the coalition for adopting him even if he is a member of PDP-Laban of Vice President Jejomar Binay.

Pimentel was originally part of UNA. He joined Team PNoy after UNA included his political rival, Miguel Zubiri, in its slate.

She pledged allegiance to Aquino, saying: "Rest assured. We [the NP] will always be supportive of your presidency." 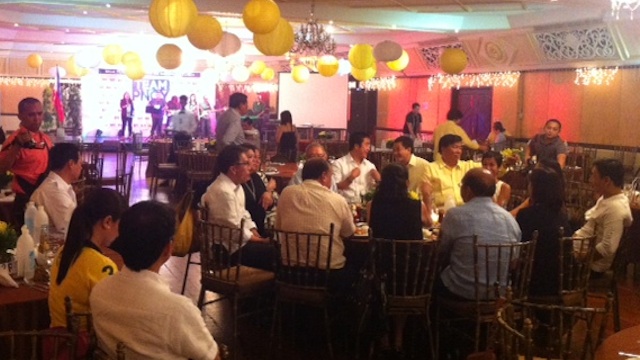 HAPPY STALWARTS. Liberal Party stalwarts and senators-elect laid back and celebrated their victory at the event in Club Filipino. Photo by RAPPLER

The festive event hall was decked in yellow, the color of the ruling LP. The celebration started with a thanksgiving mass, followed by speeches from Drilon, the senatorial bets, and Aquino. A band played as guests enjoyed food, beer and each other's company.