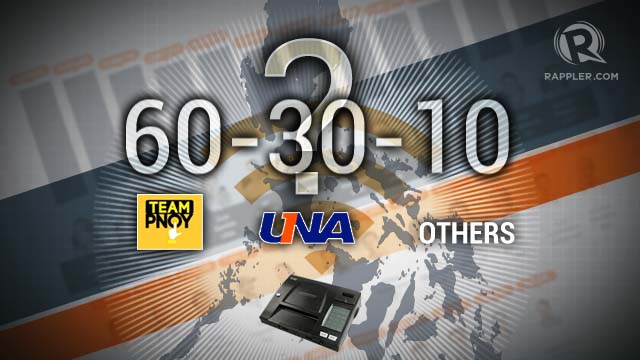 MANILA, Philippines - The regional breakdown of election results in the May 2013 senatorial race does not support claims made by some sectors about a supposed uniform and pre-determined 60-30-10 share of votes – indicating systematic cheating – in favor of the administration's Team PNoy.

Ateneo mathematics professor Felix Muga II, a member of the watchdog Automated Election System Watch (AES Watch), recently pointed out an “interesting pattern” in the results, as reflected in the 1st to 16th official canvass of the Commission on Elections (Comelec).

It shows a pattern that Muga said could have been pre-determined: an aggregate 60% of the votes going to candidates of Team PNoy, 30% to candidates of the opposition United Nationalist Alliance (UNA), and 10% to the independent candidates.

Rappler studied the regional results of the race from officially canvassed results, and found that nothing suggests that the vote shares were anomalous. While Team PNoy swept all the regions based on the aggregate votes of its 12 bets compared with UNA's 9, the percentages that each coalition got per region varied.

We also ran the data by Michael Purugganan, a Filipino scientist familiar with statistics and Dean of Science at New York University. He said there is, indeed, "a 6% spread between the low and the high end by region," which is "a pretty respectable spread in the variation."

Despite the variation per region, the data converged at a national average. "So every time you release a time result (as reflected in the canvass reports), that's just a national average. You are just getting more data that give you a better and better estimate of the national result," Purugganan told Rappler.

We summed up all the votes cast in the senatorial race per region and isolated the votes received by Team PNoy bets, UNA bets, and the independent candidates (see table). Then we got the percentage share of each slate from the total votes cast in each region.

We also isolated the per capita share of Team Pnoy, UNA, and the independents, bearing in mind that Team PNoy had 12 candidates and UNA had only 9.

We observed the following:

1) In the Cordillera Administrative Region (CAR) and in Regions 1 (Ilocos Region), 2 (Cagayan Valley), and 3 (Central Luzon), UNA got higher than 30% of the votes. It performed best in Region 2 (Cagayan Valley) with 35.70%. Region 2 comprises the provinces of Batanes, Cagayan, Isabela, Nueva Vizcaya, and Quirino.

A total of 4 UNA bets made it to the top 12 in this region. Nancy Binay, whose father traces his roots to Isabela, was No. 1. Juan Ponce Enrile Jr, who is Cagayan's outgoing representative, placed No. 3.

3) Nationwide, it is in the National Capital Region (NCR) where the independent senatorial candidates got their biggest share of the pie, with 11.87% of the vote share. Team PNoy got 57.54% of the voter share in the NCR, while UNA got 30.59%.

NCR has the second highest concentration of voters at 5.9 million votes.

5) Whatever gains UNA established in Luzon regions were wiped out by Team PNoy in the Visayas – Regions 6, 7, and 8. UNA’s percentage share in these 3 regions dropped below 30%, pushing Team PNoy’s share beyond 60%.

6) In Mindanao, including Caraga and the Autonomous Region in Muslim Mindanao (ARMM), the UNA slate recovered from their drubbing in the Visayas region, getting more than 30% of the share. However, only 3 of its candidates benefitted from this.

In Regions 9 (Zamboanga Peninsula), 10 (Northern Mindanao), and 11 (Davao Region) and Caraga, only Nancy Binay, JV Ejercito, and Juan Miguel Zubiri broke into the top 12. In the ARMM, only Binay, Zubiri, and Enrile landed in the top 12. In Region 12, there was slight improvement for UNA as 4 candidates made it to the top 12: Binay, Ejercito, Gregorio Honasan, and Zubiri.

7) If the results are broken down per capita (average vote share of each 12 Team PNoy and 9 UNA bets versus the total number of votes), the ratio is closer to a 50-40-10 sharing in Team PNoy’s favor.

This is particularly true in the 3 regions where the candidate who topped the senatorial race belongs to UNA: Region 2 (Binay), Region 10 (Zubiri), and the ARMM (Binay).

The map below shows candidates who ranked No. 1 in every region, as well as the per capita votes ratio for said regions. Orange icons represent areas where the No. 1 candidate is from UNA, while the yellow icons stand for areas where Team PNoy candidates ranked first.

Too early to tell

Eric Alvia of the National Citizens’ Movement for Free Elections (Namfrel) said “it is too early to make a conclusion” that there was a cheat formula applied in the elections. “I do not see established trend yet. The theory and observation (60-30-10 formula) should be subjected to a series of statistical analysis first.”

Alvia said Namfrel “is not joining” the chorus on alleged systematic cheating.

Joel Layson, a member of Namfrel’s Systems Group, said Namfrel’s initial analysis of regional data does not indicate any manipulated voting pattern. “If you look at the aggregate votes in the national level, it seems there is a trend. But if you break it down by regions, it appears there is no trend.”

Layson said a study of the results in the regional level does not reveal “parallel lines” that could indicate that the 60-30-10 formula existed. “In the regional level, the lines are not parallel. In some regions, they intersect,” he said.

While not agreeing with Muga's methodology, Layson said at least his questions served “to raise the red flag” if there was automated cheating.

IT expert Nelson Celis, also a member of AES Watch, said it is best to study provincial-level and municipal results, to determine a pattern of 60-30-10. He said AES Watch wants to study the numbers down to the precinct level to test Muga's claim.

IT security expert Lito Averia, also with AES Watch, agreed with Celis that it's too early to make conclusions without examining the votes in the different levels.

If possible, an analysis in the precinct level should be in order if this reflects any national trend, he said.

Celis and Averia said AES Watch is withholding its own interpretation of election results pending further analysis. “We want to expand the analysis to the precinct level. If the results in the precinct level show there was a pattern, then the possibility for the 60-30-10 is there,” Celis said.

Just shows how the country voted

Purugganan said the results show that "the actual votes of individual senators differ from region to region," but when aggregated according to slates, "it's consistently Team PNoy" dominating.

"It's not a conspiracy. It's telling us something real about political trends in the country and what the voters are voting for," he said.

"The pattern that was observed is to be expected if they are showing results across the country... Even if [a sample is] not across the country, if it is reflective of sentiment of country, you should still see that pattern," Purugganan said.

Comelec chief Sixto Brillantes Jr was more categorical. “Definitely walang fraud. Sigurado ako. Kasi kung sinasabi nila, may pattern, ibig sabihin pinrogram 'yon para maging 60-30-10. Definitely walang naka-program 'yon," he told reporters Thursday, May 23. (Definitely there was no fraud. I'm sure of that. If they're saying there's a pattern, then they mean it was programmed to result in 60-30-10. Definitely it was not programmed.)

"Itataya ko na naman ang reputasyon ko – walang nag-program. Kung may pattern, dahil nagkaroon lang ng coincidence probably, pero hindi naman puwedeng pattern sa lahat," Brillantes added. (I will put my reputation on the line – it was not programmed. If there was a pattern, there was probably just a coincidence. But it couldn't have been patterned all the way.)

The table above shows the votes each candidate got per region and the composition of the top 12 candidates in each regions.

The only aberration was Region 4-B, where the tally was 8-3-1. Independent senatorial bet candidate Edward Hagedorn managed to squeak in at No. 6 in the top 12. Hagedorn comes from the Mimaropa region, where he served a long time as mayor of Puerto Princesa City. – with reports from Paterno Esmaquel II, Michael Bueza and Gemma Bagayaua - Mendoza / Rappler.com