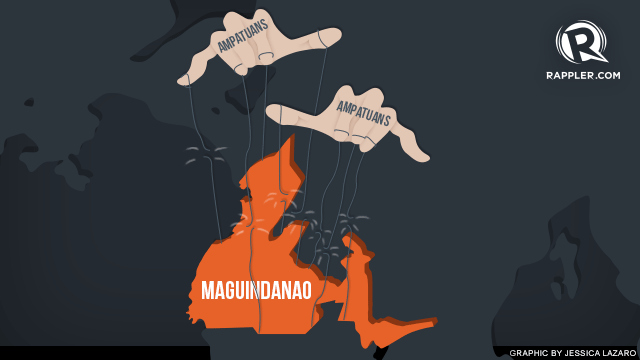 MANILA, Philippines – Are the Ampatuans losing their grip on Maguindanao?

Based on the unofficial tally of votes in the province as of Thursday, May 23, majority of the candidates who belong to the once very powerful Ampatuan clan are bound to lose. Majority of candidates from the rival clan Mangudadatu, on the other hand, have won or are set to win in the local races.

In the congressional race, both clans have one winning candidate. Bai Sandra Ampatuan-Sema has been re-elected in the first district, while Zajid Mangudadatu won his first term in the second district.

In the gubernatorial race, re-electionist Esmael Mangudadatu won, beating his lone opponent Tucao Mastura, who had formed an alliance with the Ampatuans.

The Ampatuans fielded 3 candidates for board member, but they all lost.

In the municipal level, the two clans clashed only in the town of Datu Abdullah Sangki, where Mariam Sangki-Mangudadatu won the mayoral race against Samsodhen Ampatuan-Sangki.

The rivalry of former allies Ampatuans and Mangudadatus can be traced back to the 2010 election season, when Esmael Mangudadatu, then Buluan vice mayor, decided to challenge then Datu Unsay mayor Andal Ampatuan Jr, son of then outgoing Maguindanao governor Andal Ampatuan Sr., in the gubernatorial race.

On Mangudadatu's way to filing his certificate of candidacy for governor in November 2009, 58 persons on his convoy – including Mangudadatu’s relatives, political supporters, and media workers in the province – were massacred by Ampatuan Jr and his men.

The massacre has been tagged as the country's worst case of election violence.

The Ampatuan Sr and Jr. have since been arrested and jailed in Manila. At least 27 out of the 195 accused in the case bear the name Ampatuan. A total of 92 remain at large even as the trial drags.

Ampatuan wives are in

But some residents of the province still expressed fear that justice for the victims of the Ampatuan massacre may never be served, especially that wives of the major Ampatuans accused in the killing were re-elected in chief positions in their respective towns.

"This could really crush the people's hopes that those responsible for the massacre will be punished," said Noemi Parcon, whose journalist husband died in the massacre.

"It doesn't matter that the massacre happened... as long as you're the leader of the municipality, the respect is still there even if you are doing wrong," said Bobby Taguntong, spokesman for a local election monitor.

Both the ruling Liberal Party (LP) and the opposition United Nationalist Alliance endorsed Ampatuans in local races, both saying that not all members of the clan were supportive of those who were responsible for the massacre.

Having Ampatuans in LP became an issue especially when party stalwart Sen Franklin Drilon said that there's no room for the clan in their party, even with Gov. Mangudadatu allied with LP.

But another LP stalwart, Budget Secretary Florencio Abad, explained that Mangudadatu could have approved the membership of some members of the Ampatuan clan in LP "with due consideration of the memory of his wife and his loved ones."

Most of the LP-allied Ampatuans who lost ran in the towns of Shariff Aguak and Mamasapano – towns where the clan fielded candidates the most. – with reports from Agence France-Presse/Rappler.com