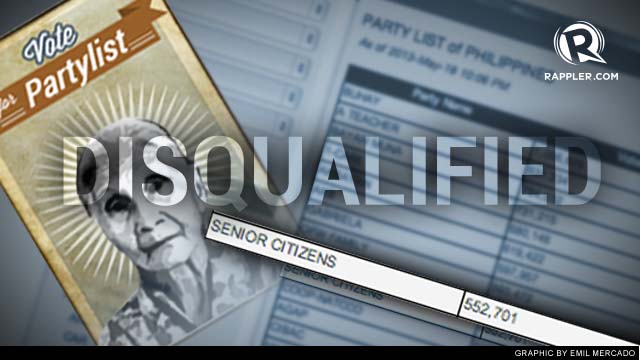 MANILA, Philippines – More district congressmen have joined the appeal of Speaker Feliciano Belmonte Jr for the Commission on Elections (Comelec) to lift the disqualification of the Coalition of Association of Senior Citizens in the Philippines, which has garnered enough votes to win at least one party-list seat.

Senior Citizens is among the 12 groups disqualified by the Comelec after the SC belatedly issued a new set of criteria for party list accreditation – the poll body by then had already included the groups in the ballot.

Acting on Senior Citizens’ petition, the high court stopped the Comelec from proclaiming winners for 5 remaining party-list seats, although the decision did not affect the groups earlier proclaimed and given the first 53 seats.

The Senior Citizens has placed 10th in count, with 677,976 votes, or about 2.3 percent of the total party-list votes cast on May 13. It entitles the group to at least one seat.

Marikina Rep Marcelino Teodoro said the votes that the group garnered is enough proof that there is a clamor for senior citizens to be heard and represented in Congress.

“The overwhelming votes that the said party garnered are reason enough for Comelec to review their disqualification judgment. The senior citizens of the country deserve to be heard and be given their rightful place in Congress,” Teodoro said.

Maguindanao Rep Simeon Datumanong noted that the disqualification of Senior Citizens did not discourage the electorate from voting for them.

“The people have spoken through the ballots, and they want Senior Citizens back in Congress to once again represent the marginalized sector of elderly citizens…. For them, Senior Citizens have served well and deserve another chance to continue rendering vital services to our elderly,” Datumanong said.

Speaker Belmonte earlier said that the decision of the Comelec is tantamount to a denial of the sector’s right to be represented in the House which they secured in the last elections.

Senior Citizens was disqualified last year due to its alleged violation of the term-sharing rule.

On December 31, 2011, its representative David Kho resigned as member of Congress to give way to the group’s fourth nominee, Remedios Arquiza.

Under the party-list law, when a nominee sitting in Congress vacates his post, the group should send in the nominee who is next on the list that it earlier submitted to the Comelec.

Quezon City Rep Winston Castelo argued that the said “technicality should not prevail over the sovereign will of the people.” – Rappler.com