NCR: All re-elected and returning mayors 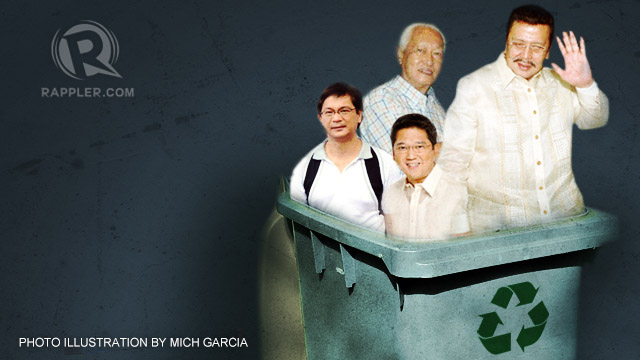 MANILA, Philippines – What do Manila’s Alfredo Lim and Muntinlupa’s Aldrin San Pedro have in common?

In the last elections, they were the only ones who lost among the big majority of Metro Manila mayors who sought re-election. And those who dislodged them are not neophytes either.

Specifically, 11 of 17 mayors in the National Capital Region (NCR) in the next 3 years are re-elected ones. The rest are former mayors who have re-taken City Hall, or relatives of local chief executives who are reaching their term limits on June 30.

This is hardly surprising, as Rappler reported during the campaign the absence of fresh faces among candidates for major posts in the NCR.

Thirteen mayors sought re-election on May 13. Eleven of them won:

In Manila, re-electionist Lim was dislodged by former President Joseph Estrada, who, many years ago, was mayor of San Juan. Estrada got 343,993 votes while Lim received 308,544 votes.

Four re-electionists pulled away from the race with huge leads over their rivals:

The closest fight, on the other hand, was witnessed in Pateros, where Medina won another term with 12,886 votes, against Ike Ponce who got 12,284 votes – a lead of just 602 votes.

Sherwin Gatchalian ran for congressman and won, while Robert Eusebio is taking a break from politics.

Florencio Bernabe Jr of Parañaque City and Enrico Echiverri of Kalookan City fielded their sons to replace them, but both lost. Bernabe is taking a break from politics as well, while Echiverri ran for congress and won.

In the other cities, two former mayors – Macario Asistio Jr of Kalookan and Wenceslao Trinidad of Pasay – attempted to reclaim their former positions, but both failed.