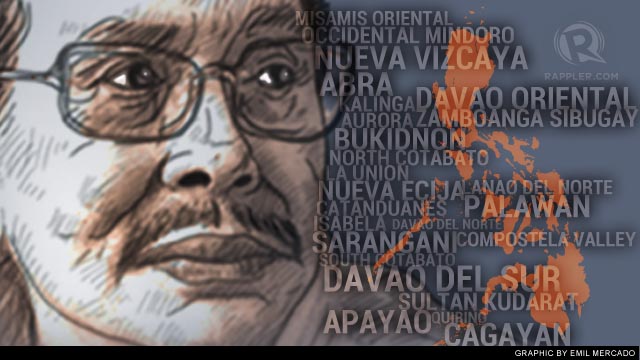 MANILA, Philippines – Joseph Victor “JV” Ejercito, son of former President Joseph Estrada by former actress and now San Juan Mayor Guia Gomez, won as senator in the recently concluded midterm polls – thanks in part to the areas that delivered for the Estradas in 2010.

In 2010, when Estrada ran a second time for president, and his other son (by wife former senator Loi Ejercito) Jinggoy sought re-election as senator, they topped the polls in these 25 provinces and 5 cities. JV won in these areas as well, although did not place as high as his senator brother did.

JV got 2.99 million votes from the said provinces, 12 of which are from Mindanao, which is considered an Erap country. Three of these provinces – Davao Oriental, Sarangani, and Apayao – are among the 10 poorest in the country.

Aside from these, the 3 Estradas placed high in 5 cities – Navotas, Zamboanga, Cagayan de Oro, Iligan, and Davao.

JV’s camp devised a strategy to make sure the provinces that delivered for his father and brother will also give him the votes.

“We wanted to consolidate the Estrada votes,” an insider from JV’s camp told Rappler. “They became our target areas.”

They heavily campaigned in these provinces, pouring more time and resources here than in places where JV was weak, like Visayas.

They employed the 2½ campaign cycle – they made sure making complete rounds of pro-JV areas in March and April, and relegated the visits to the Visayas or weak areas to the last two weeks of the campaign.

Among the provinces in these priority areas, Ejercito got the highest votes from Nueva Ecija with 487,150. One of the members of the core group of the United Nationalist Alliance (UNA), under which JV ran, is former Nueva Ecija Rep Simeon Garcia. Garcia is the former chief of staff of Ejercito's brother, Jinggoy.

They also targeted cities where the father Estrada won in 2010: Navotas (where UNA campaign manager Toby Tiangco is from), Cagayan de Oro City, Davao City, Iligan City, and Zamboanga City. JV made it to the top 10 in these cities.

JV ranked second in San Juan, where his mother is mayor and where he is congressman. Grace Poe was the top vote-getter in the city. His father, who served as mayor of San Juan for 17 years, also lost in the said city in the 2010 presidential elections.

“The original plan was to drop Visayas,” the source from JV’s campaign said. They wanted to focus on places that were already pro-Estrada, where there was a “bigger bang for the buck.”

JV still went to Negros Occidental and Cebu, however, in May. The insider told us that they tapped Ejercito's mother side and some Ilonggo-talking groups to get the vote of Bacolod City. Ejercito's mother is from Silay City.

Jinggoy placed 1st and 2nd in the said provinces and cities in 2010, higher than JV's ranking. But when Jinggoy first ran for senator in 2004, he also placed lower in the elections nationwide, at 10th place – just a slot higher than JV, who finished 11th nationwide this year.

JV placed as high as 3rd to 5th in the surveys. What did the trick, according to Pulse Asia president Ronald Holmes, was when he changed his surname from “Ejercito, Joseph Victor ‘JV’ Estrada” to “Estrada, JV Ejercito” in September 2012.

A member of Ejercito's inner circle said they conducted an internal survey and found that JV was known to the public in this order: as Estrada's son, then as a businessman, then as a senator (mistaking him for Jinggoy), then as a congressman.

So they changed his surname in the campaign to “Estrada.” (Ejercito is the real-life surname of the family; Estrada takes after the father’s screen name as an actor.)

But Ejercito started to drop in the surveys in February 2013 and slid to the 5th-11th place in April. He finished 11th among 12 winning senators.

An insider from his camp said they were projecting an 8th -9th finish, but said a number of factors could have pulled him down. One, there was a two-week period in April when they did not place any campaign ads due to the “lack of funds.”

Second, the father’s presence was limited in JV’s campaign. Estrada was himself running for mayor of Manila, against re-electionist Alfredo Lim, this year, unlike in 2010 when he was campaigning for a national post along with Jinggoy.

“Erap was deeply involved in his own campaign” and was not able to attend all of UNA's campaign sorties, the insider said.

The insider added that the issues raised on Ejercito's alleged offshore accounts in British Virgin Islands could have also affected his ranking.

There was also the issue on the ad with Jinggoy. JV and Erap were in Baguio when Jinggoy said he was willing to appear in a campaign ad with his half-brother. JV refused the offer, saying it would only disrupt the storyline that his image handlers had already set for his campaign. It put the spotlight on what has been perceived as long-running sibling rivalry between the two

In hindsight, would the JV camp have done it to pull up his numbers? The source said, even if they did, it was too late in the game – the Supreme Court only lifted the Commission on Elections’ airtime limits for ads in April, less than a month before the elections.

Another factor that affected JV's numbers was the loss of key allies in some parts of Mindanao – the Jalosjojs clan was replaced by the Uys in Zamboanga del Norte, while Davao del Sur's former governor Douglas Cagas lost to Joseph Peñas.

“Na-wipe-out (Our allies were wiped out),” the source from Ejercito's camp said. – Rappler.com