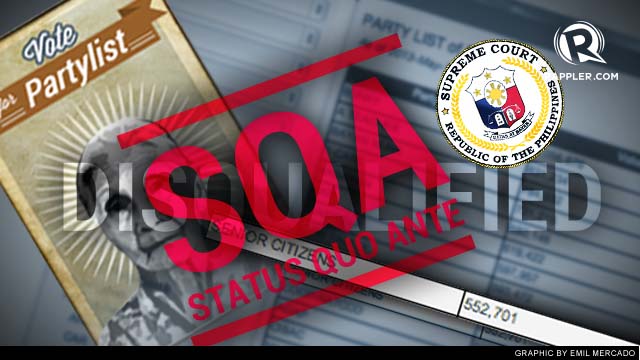 MANILA, Philippines (3rd UPDATE) - The Supreme Court on Wednesday, June 5, issued a status quo ante (SQA) order against the May 10 resolution of the Commission on Elections (Comelec) disqualifying two party-list groups from the May 13 elections.

The party-list groups involved are Abang Lingkod and the Coalition of Association of Senior Citizens in the Philippines (Senior Citizens) partylist.

The court also ordered the Comelec to reserve a seat the House of Representatives for Senior Citizens but “held in abeyance," according to Supreme Court spokesman Teodore Te. Abang Lingkod's proclamation is also put on hold by the SC.

The two groups are among the 12 groups disqualified by the Comelec after the SC belatedly issued a new set of criteria for party list accreditation – the poll body by then had already included the groups in the ballot.

The Senior Citizens has placed 10th in count, with 672,260 votes, or about 2.37 percent of the total party-list votes cast on May 13. It entitles the group to at least one seat.

Meanwhile, Abang Lingkod garnered around 258,607 votes, qualifying it as well for a seat in the House of Representatives.

Te also explained whether Chief Justice Maria Lourdes Sereno's TRO against the proclamation of the remaining party-list winners was effectively revoked due with the latest ruling. Te said "all previous orders are superseded if inconsistent with the SQA."

Te added that the SC leaves it to the Comelec “to interpret” the court order on whether to resume the proclamation of party lists.

In an interview with reporters, Comelec chair Sixto Brillantes Jr said the poll body will study the new SC orders' impact. Brillantes said he will brief reporters on their consensus on Thursday, June 6.

On November 2012 the Senior Citizens partylist was already disqualified for illegal term-sharing in the House of Representatives. But the following month, the group secured a status quo ante order (SQAO) from the SC, allowing it to remain on the official ballot.

The two groups were not supposed to be included in the party-list race but an SC ruling in their favor forced the Comelec to include their names when the ballots were printed in January.

But the Comelec still disqualified Senior Citizens and 11 other party-list groups on May 6, 2013, a month after the Supreme Court (SC) issued a six-point guideline redefining party-list eligibility.

Earlier, more district congressmen have joined the appeal of Speaker Feliciano Belmonte Jr for the Comelec to lift the disqualification of the Senior Citizens party list.

Speaker Belmonte said that the decision of the Comelec is tantamount to a denial of the sector’s right to be represented in the House which they secured in the last elections.

Marikina Rep Marcelino Teodoro said the votes that the group garnered is enough proof that there is a clamor for senior citizens to be heard and represented in Congress.

Maguindanao Rep Simeon Datumanong noted that the disqualification of Senior Citizens did not discourage the electorate from voting for them.

“The people have spoken through the ballots, and they want Senior Citizens back in Congress to once again represent the marginalized sector of elderly citizens…. For them, Senior Citizens have served well and deserve another chance to continue rendering vital services to our elderly,” Datumanong said. - With reports from Ace Tamayo and Paterno Esmaquel II/Rappler.com