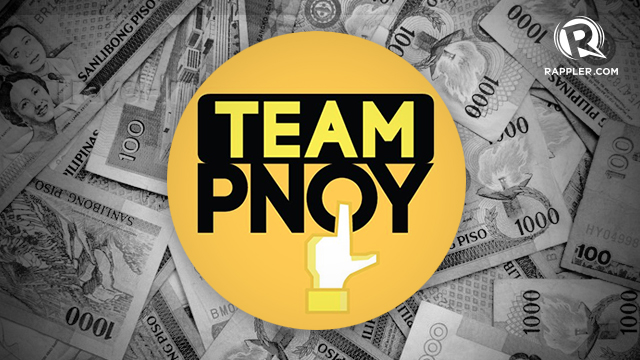 Individuals who donated to their campaign funds included mostly relatives, lawyers from famous law firms, and a few family friends who are connected to government offices.

Some of the companies which donated to a few of President Benigno Aquino III's candidates have businesses that need franchises and other special permits from national government agencies.

Rappler went through the list of contributors of each candidate under the Team PNoy slate, as stated in their respective Schedules of Contributions Received (SCRs) that the Commission on Elections (Comelec) made available to Rappler.

One Team PNoy candidate – Jamby Madrigal – did not receive contributions from other people. She reported spending only her own money for the campaign.

Click on the surnames below to jump to that candidate's notable contributors.

Several of Bam Aquino's relatives contributed to his 2013 senatorial campaign:

Jose Luis Gomez, a sponsor in Bam's and Timi's wedding in September 2012, contributed a total of P5 million.

Nine top officials of the Energy Development Corporation, a company owned by the Lopezes, contributed a combined P10.1 million in cash.

Federico Galang, Vice President and CEO of Philippine Commercial Capital Inc, contributed P5 million. Nilo B. Peña, a member of the Board of Directors of Sun Life Financial Philippines, gave a total of P2.3 million.

Three lawyers connected to "The Firm," or CVC Law, donated to Cayetano's campaign: John Jerico Balismono and Alfredo Molo, with P500,000 each; and Kristoffer James Purisima, with P200,000.

Other notable businesses and businessmen gave various amounts of money to Escudero:

Lawyers from different law firms also contributed to Escudero's campaign, with a combined amount of P14.95 million. Included in this list is Diosdado Marasigan, Escudero's fellow partner at EMSAVVIL, who contributed P1 million.

Robert Francis Garcia, a former NPA member and author of To Suffer Thy Comrades, a book about NPA purges in the 1980s, gave P250,000. Jorge Baviera, an activist during the Marcos regime, gave P2 million.

Gabriel Paolo "Heart" Diño, the first transgender chairperson of the University of the Philippines Diliman Student Council, shelled out P300,000.

Most contributions came from various cable companies across the country:

Four other cable-related executives and entities donated to Magsaysay:

Magsaysay, an engineer by profession, was into cable TV business before he turned the company over to his son.

Two officials who served under President Fidel V. Ramos contributed to Jun Magsaysay's campaign: Isabel Caro-Wilson, former ambassador to Spain; and Escolastica Segovia, executive director of the Garments and Textiles Board under the Department of Tourism.

Most of re-elected Sen Koko Pimentel's major contributors are associated with Maryland Distributors Inc (MDI), under the Monheim Group of Companies (MGC).

MDI and 6 other distributors under MGC added P10.2 million. Even the SEB Commercial Center, where MGC's head office is located, donated P2 million.

The directors mentioned above were respondents in a lawsuit over the tampering of Red Bull energy drinks. The case was dismissed by the Department of Justice in December 2012.

Other notable donors are:

Her husband, Teodoro Llamanzares, gave P4 million to her campaign.

These individuals gave P5 million each:

Among those who contributed P1 million were:

The wife of outgoing Sen Manuel Villar only had two donors, and their contributions were not in cash.