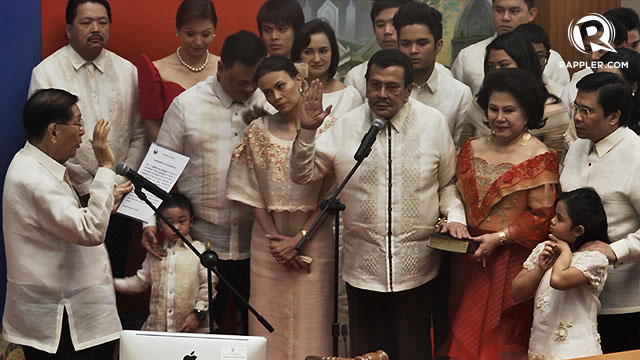 MANILA, Philippines – Twelve years after he was ousted in an uprising, former President Joseph Estrada staged his political comeback, calling himself the “ex-convict mayor” of Manila.

Estrada, 76, took his oath as the chief executive of the Philippine capital on Sunday, June 30, exactly 15 years after he was sworn in as the Philippines’ 13th president.

The popular movie star-turned-politician began his inaugural address in typical colorful fashion, cracking jokes about his ouster and conviction for plunder in 2007.

“This is another historic milestone for the city of Manila. For the first time, Manila will have an ex-convict as your city mayor,” Estrada told a crowd that included Vice President Jejomar Binay, family, political allies, former Cabinet members, and Manila city hall employees.

“Kung ako man ay ex-convict ito ay dahil sa aking prinsipyo. (If I were convicted, it was out of principle.) I feel that I am in good company with Nelson Mandela of South Africa, Anwar Ibrahim of Malaysia, Aung San Suu Kyi of Myanmar, and our own Sen Ninoy Aquino who was also convicted by a military court.”

“We were all convicted that is why we are now all men of conviction,” Estrada quipped.

Turning serious, Estrada outlined his agenda to “bring back the glory and beauty” of the once famed Philippine capital. He was elected after promising to address what he called the city's decay.

Estrada won as mayor of Manila in the May polls, defeating friend-turned-rival Alfredo Lim of the ruling Liberal Party (LP). Estrada is a stalwart of Binay's opposition United Nationalist Alliance (UNA).

It was one of the hottest and most watched local races, with the two controversial figures’ rivalry turning personal and at times ugly.

His victory marks his return to government, after placing second to President Benigno Aquino III in the 2010 presidential race. Estrada makes history as the only deposed leader in recent history to make a political comeback. 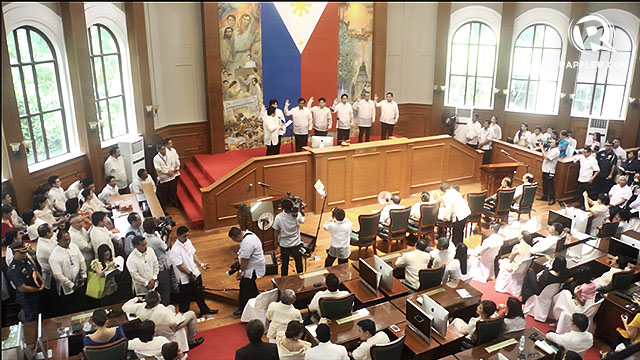 ‘Anti-corruption centerpiece of my admin’

Estrada was impeached, detained, and convicted for allegedly receiving payoffs from illegal gambling. Former President Gloria Macapagal-Arroyo though pardoned him just weeks after he was convicted in 2007.

“The fight against corruption will be the centerpiece of my administration. We will clean up our police force to see to it that they will be Manila’s finest, not Manila’s worst,” he said in his speech.

The new Manila mayor cited a study of University of the Philippines professors and police reports about the high poverty, unemployment and car theft incidence in Manila.

“Ang mahihirap ay tinutulungan, hindi kinokotongan. Dito sa Maynila, ang mahihirap ang amo ni Erap,” said the leader who branded himself a champion of the masses. (We must help the poor, not steal from them. Here in Manila, Erap’s boss is the poor.)

Estrada also called on businessmen to install CCTV in commercial establishments to help the city government fight crime. He urged his councilors to pass an ordinance for this purpose.

In his first 100 days, Estrada vowed to clear the streets of vendors that cause traffic. “My proposal is to have a night market.”

“We will start cleaning our waterways to mitigate flooding. We will do this in line with a clear climate change adaptation and disaster risk reduction mitigation program. We must learn our lesson from last year …. We will give full attention to the dredging of esteros and we will relocate those living there to a safer place.”

Estrada said the city government will cooperate with President Aquino’s plan of relocating informal settlers living near waterways. He also thanked Binay, the housing czar, for promising to assist in the effort.

Estrada said his government will expedite the release of business permits and licenses.

“There are problems left and right that’s why investors and businessmen transfer to other cities and leave Manila.”

‘From gates of hell to premiere city’

Estrada said the plan to renew Manila includes an admission of the city’s numerous problems.

(Are we still surprised that Dan Brown calls Manila the gates of hell? Many are still in a state of denial, but to me this is a wake up call so our cry is wake up Manila, rise Manila, move forward Manila!)

Estrada though said he cannot fulfill all his promises alone in his 3-year term.

(I am not superman and i know I cannot give an immediate solution to all these. I ask for your sacrifice, added patience and understanding, and most of all, whole-hearted concern and help.)

In assuming office as Manila mayor, Estrada comes full circle. After show business, he began his political career as mayor of San Juan in 1969 and held the post until 1986.

Estrada was elected senator in 1987 and vice president in 1992. He became president in 1998 with an overwhelming mandate, only for his term to be cut short after 3 years amid corruption allegations.

The former President has often said that the election of his wife, Dr Loi Estrada, and son Jinggoy Estrada as senators, and his near victory in 2010 marked his full vindication.

He said he decided to run for Manila mayor to give back to a city where he was born, and made a name in show business.