Something curious about JV’s and Jack’s contributors 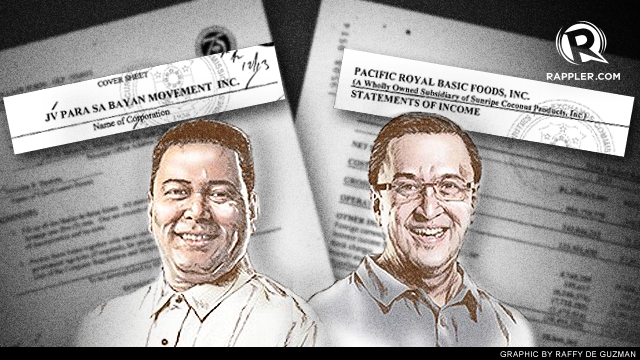 MANILA, Philippines – Friends and families – politician fathers, especially – indeed tried to outdo each other in contributing to some senatorial candidates.

They were so eager, in fact, some of them seem to have overlooked that some figures didn't match other public documents that show their financial capabilities.

Senators Juan Ponce Enrile and Edgardo Angara, whose respective sons sought to continue their legislative legacies, proved to be generous fathers, if we are to go by the Schedule of Contributions Received (SCR) submitted by candidates to the Commission on Elections.

This accounted for 90 percent of the total donations that Jack received. He got a total of of P150.8 million in contributions.

Angara, for his part, shelled out P40 million from his personal money to the campaign of his son, former Aurora Rep Sonny Angara.

The older Angara's latest sworn Statement of Assets, Liabilities and Net Worth (SALN) shows that his cash on hand amounted to P73.22 million. This means he gave up more than half of this to contribute to Sonny's campaign. Sonny won.

The only contributor that outdid Ejercito's mother was an NGO called JV Para sa Bayan Movement Inc, which poured P43.69 million into his campaign.

This is where the contributions become curious.

In the latest financial statement filed by Pacific Royal with the Securities and Exchange Commission (SEC), it shows that the Enrile-owned company had a net income of P81.84 million in 2011.

When election season rolled in by 2012, however, it could afford to contribute P135.96 million to Jack Enrile's campaign – an amount that could put the company in the red.

While the non-stock non-governmental organization reported to SEC a capital of only P90,000, it contributed P43.69 million to Ejercito's campaign.