Candidate of the masses? 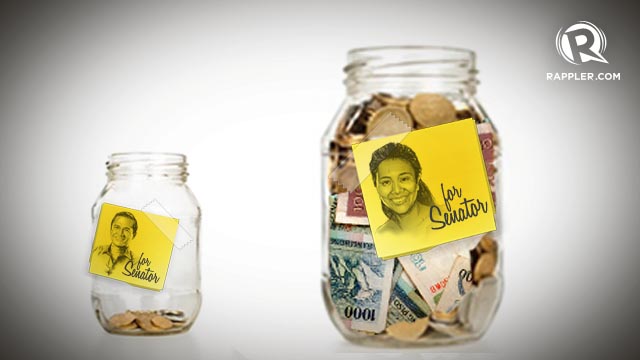 MANILA, Philippines – It was logical to expect that in the 2013 senatorial elections, Makabayan Coalition candidate Teddy Casiño, given his work at the grassroots since his student days, was the one in touch with and would have the support of the masa.

When results came in, however, the marginalized sectors’ votes proved not enough to make him win (he finished 22nd with 4,295,151 votes) – although enough, as they had always been, to win a number of his allies party-list seats in the House of Representatives.

When senatorial bets’ Schedules of Contributions Received (SCR) came in, the candidate-of-the-masses tag was effectively stolen by another candidate: Nancy Binay of the United Nationalist Alliance.

How did that happen, when Binay received a total of P136.87 million in contributions compared to Casiño’s P9.2 million?

The Makabayan bet, on the other hand, only had one contributor from the so-called lower-end bracket, and the amount donated wasn't even P500. That contributor gave P100,000.

Casiño – a former representative in Congress of the progressive party Bayan Muna – only had 10 contributors, who gave anywhere from P100,000 to P2 million each.

Casiño was even his own donor, shelling out P950,000 of personal money for his campaign.

Here’s a breakdown of contributions reported by Casiño:

On the other hand, Binay – daughter of the Vice President and whose family has been ruling Makati City for almost 3 decades – reported receiving these contributions:

The projection of masa support is a strategy that Senator Binay must have learned from her father, Vice President Jejomar Binay. It had worked for him.

In 1994, while mayor of Makati City, Binay was put behind bars over what he branded as politically-motivated graft cases initiated by the administration of President Fidel Ramos.

Newspapers ran stories and photos of him receiving tin cans filled with coins, which masa supporters supposedly contributed to bail him out. He was out in no time.

The graft cases were later dismissed by the Sandiganbayan in 2001.

Throughout his stint as Makati mayor, he was able to sustain the class divide that ensured his vote machinery: The allegations of corruption, he’d always say, were coming from the “mapuputing kamay” (literally, fair skinned hands, referring to the rich) who didn’t like his pro-poor policies.

During the 2010 vice presidential elections, Binay’s political ads during the homestretch of the campaign projected him as the one really in touch with the masa, in sharp contrast with opponent Mar Roxas who came from an old-rich family. – Michael Joseph Bueza, Reynaldo Santos Jr, Aries C. Rufo /Rappler.com