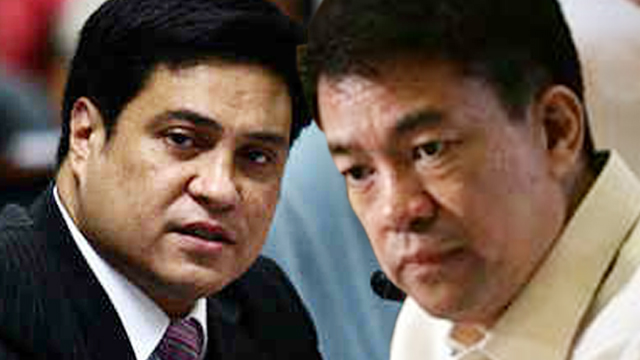 KOKO'S FATE. Binay, Estrada and Enrile will discuss the bitter dispute between Sen Koko Pimentel and Migz Zubiri in an UNA meeting on Monday.

MANILA, Philippines – Who is in and who is out?

Pimentel sent the letter to his godfather, former President Joseph Estrada. He said he would rather leave UNA than run alongside Zubiri who he called an “election cheat.” (Read Estrada's response: Erap stands by Migz; tells Koko to forgive)

Estrada, Binay and Senate President Juan Ponce Enrile will be at the meeting, along with the UNA secretariat headed by Navotas Rep Tobias “Toby” Tiangco.

The leaders will gather in Binay’s office in the Coconut Palace in Pasay.

Ahead of the meeting, Bautista already made clear UNA’s stand on Pimentel’s letter.

“The inclusion of Migz in UNA comes from being a member of the PMP, a partner of the coalition. It will be up to Sen Koko to adjust to that fact,” Bautista said in a phone interview.

Asked about Pimentel’s warning that he might leave UNA, Bautista said, “We prefer that Sen Koko runs with the slate but in the end, we can’t force him.”

Bautista, however, expressed hope the rift will be resolved in the meeting.

“Erap wants to speak with Koko. He is invited but we do not know if he will attend.”

Bautista also described as unfortunate Pimentel’s decision to release the letter to the media two weeks after sending it to Estrada.

Pimentel’s letter was dated May 21. It was released on Thursday, June 7.

“I wonder why Sen Pimentel uploaded it to his Twitter [account]. Matagal na iyan eh (It was sent a long time ago). It is not one of the wiser decisions he has made,” said Bautista.

During the meeting, UNA will also discuss finalizing its senatorial slate and updates on its petition for accreditation.

‘Take leave to run under LP’

Bautista responded to statements of Liberal Party (LP) leaders that Pimentel is welcome to join them in 2013.

In a statement, LP’s Sen Francis Pangilinan said Pimentel is “more than welcome” to the LP ticket.

“I am willing to help him [affiliate with LP] and persuade the leadership of the party and the coalition to include him in the ticket,” said Pangilinan.

Bautista, however, said Pimentel has not told UNA that he intends to run under the LP. Pimentel is in a tough position because he is the president of PDP-Laban.

Bautista added that it will be LP’s prerogative to include Pimentel in its slate should he make good on his threat to bolt UNA.

“As I said, it will be the decision of Sen Pimentel,” said Bautista. – Rappler.com