UNA to Pimentels: It’s not about the money 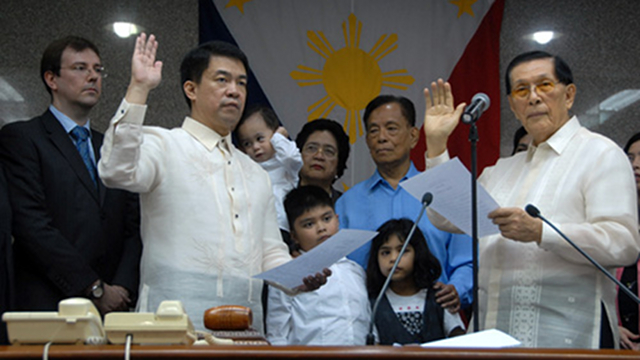 MANILA, Philippines (UPDATE) – The United Nationalist Alliance (UNA) was quick to rebut a stinging statement from its partner’s co-founder.

In a statement on Tuesday, June 12, UNA described as “far from the truth” allegations of former Senate President Aquilino “Nene” Pimentel Jr that the party prioritizes money over principles.

Pimentel made the statement in reaction to UNA’s decision to include resigned Sen Juan Miguel “Migz” Zubiri in its senatorial slate despite the strong objection of his son, Sen Aquilino “Koko” Pimentel III.

While UNA said it respected the elder Pimentel, it took exception to his statement.

“We find it unfortunate that the former Senator may have overstepped the bounds of civility when he equated the decision of UNA to field Migz Zubiri as placing priority on money over principles. Nothing can be farther from the truth.

“We would like to remind him that unlike the LP, … UNA does not have access to the formidable government resources at LP’s disposal.”

UNA again reminded the younger Pimentel that he is bound by the Covenant of Unity of the alliance. The coalition said this means he should honor Zubiri’s inclusion in the slate, and decline invitations from other parties.

On Tuesday, June 12, Pimentel III confirmed that he has been receiving feelers from the LP.

“Senator Koko has not declined [the invitation] despite a clear provision in the unity agreement against running with a party not included in the alliance,” UNA said.

In an interview with ANC, the ABS-CBN News Channel, Pimentel III said if he leaves UNA, he will be open "for adoption" by other groups.

He clarified though that even if he does not join UNA, he will remain with PDP-Laban, his party since 1982. He said an option on the table is for PDP to break away from Laban.

"It's really going to be ironic but also tragic. It's painful that just because one person joined a party and yet another party will be in disarray, not the party that he joined. That's why what's key here is to contain the problem, not to make it big because we've been together for a long time, since the 1980s," Pimentel III said.

Binay said UNA will respect Pimentel III but insisted that it was the alliance’s collective decision to accept Zubiri.

Binay is a long-time ally of the Pimentels as their partymate and fellow leader in PDP-Laban.

“But for now, he is still with UNA. We will wait for his decision before we talk in UNA,” Binay told reporters.

Pimentel III has said he will first consult family, friends and supporters before deciding on his next move. – Rappler.com