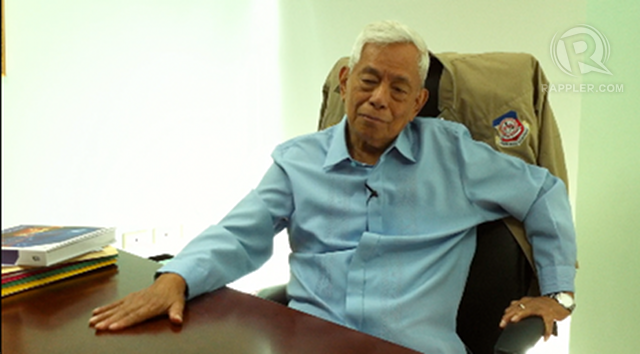 IT'S SAD. PDP founder and former Sen Nene Pimentel said he is saddened by reports the party he co-founded will be dissolved over Migz Zubiri's inclusion in UNA. Photo by Ayee Macaraig

MANILA, Philippines (UPDATED) – There is no more PDP or Laban. There is only PDP-Laban.

Former Senate President Aquilino “Nene” Pimentel Jr is not keen on the suggestion to dissolve the party he helped found to resolve the dispute between his son, Sen Aquilino “Koko” Pimentel III, and resigned Sen Juan Miguel Zubiri.

In an interview with Rappler at his office in Makati on Wednesday, June 13, the elder Pimentel commented on reports that PDP might break away from Laban over Zubiri’s inclusion in the senatorial slate of the United Nationalist Alliance (UNA).

“That will be a difficult proposition to say the least because Jojo Binay is a top leader of PDP. You cannot just ignore him but it will really cause a division of the party if it comes to that,” said Pimentel Jr.

Pimentel III has said that dissolving the merger of PDP and Laban is one of the options being considered to address his objection to Zubiri’s inclusion in the UNA slate.

The elder Pimentel founded PDP in 1982 as part of efforts to fight the Marcos dictatorship. PDP stands for Partido Demokratiko Pilipino. It later aligned with Laban or Lakas ng Bayan, which was founded by the late Sen Benigno “Ninoy” Aquino Jr.

Now, Pimentel Jr said it will be hard to determine who are strictly PDP members and Laban members.

Instead, Pimentel Jr said what might happen is PDP-Laban members who support his son's cause might agree to bolt UNA along with the younger Pimentel.

“That’s the sad part because of course, having been one of the founders of this group, you spent a great deal of your political life trying to nourish it into maturity and only to see it break up in your old age.”

'Accepting Migz is against party ideals'

During the interview, Pimentel Jr said accepting Zubiri into UNA went against the principles of PDP-Laban.

“Because we have always opted for clean and honest elections and being true to your oath of office, serve the people and that’s why we find it a little difficult to just accept this rationalization for their acceptance of Migz into the folds of UNA.”

Pimentel Jr stood by his decision to support his son and criticize UNA. He said he cannot envision his son, the cheated, and Zubiri, the alleged "cheater," on the same slate.

But the elder Pimentel gave an indication of where father and son stood with regard to Zubiri being on the same UNA slate.

“How incongruous and to my mind, completely indefensible, especially morally speaking because I don’t believe in the practical truism that anything goes in politics. If that’s the case, how will we ever change the country?”

He questioned UNA’s response to his press statement against Zubiri. UNA defended Zubiri from the Pimentels' allegations that he was involved in election cheating. The coalition said its focus is to win in 2013.

“I don’t believe in winning at all costs in politics. ‘Di ko kayang lununin ‘yun,” Pimentel Jr told Rappler. (I cannot stomach that.)

The former senator also explained his statement that UNA welcomed Zubiri because of money.

“It looks like Migz Zubiri is oozing with a lot of money.”

“If there is one asset that Migz Zubiri has that Koko doesn’t have, it’s money for the funds needed by a political group like UNA. Koko has no money to contribute to UNA. He can contribute people (supporters) but money, not that kind of money.”

In a second statement issued on Thursday, June 14, UNA reiterated that it did not choose Zubiri over Pimentel. The coalition said it even named the senator as an official candidate way ahead it accepted Zubiri.

"The basis for their selection was their endorsement by their respective parties in the alliance. Wild speculations by the good Senator (Pimentel Jr) add only heat but fail to generate light," said UNA.

UNA also said the Pimentels must respect the coalition’s covenant of unity to accept the nominees of PMP.

Yet Pimentel Jr said in reply, “Even covenants are governed by moral principles also. It can’t be just what the interpretation of the group is even if it’s contrary to moral principles. I don’t think that’s correct.” 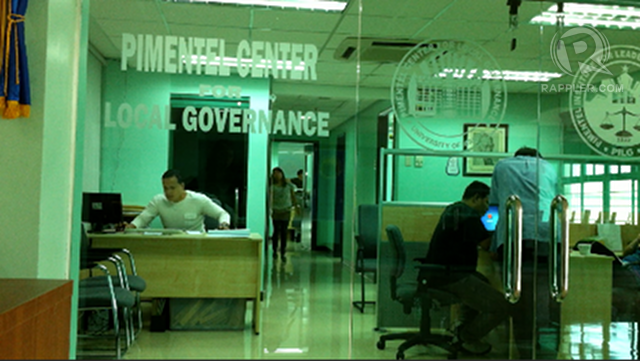 LEAVING CENTER? Because of his stand against Migz Zubiri, former Sen Nene Pimentel told VP Binay he is ready to leave the center named after him. Photo by Ayee Macaraig

Pimentel Jr revealed that he expressed his objection to Zubiri even before UNA formally accepted the resigned senator.

Three months ago, Pimentel Jr wrote Binay saying he is ready to leave the Pimentel Institute for Leadership and Governance if necessary. Based in the University of Makati, the institute trains leaders to help improve local governance.

It was Binay’s idea to create a center named after Pimentel Jr so that he could continue his local government advocacy even after his retirement from politics.

Pimentel Jr said days after he sent the letter to Binay, the Vice President visited him to tell him that they should separate academics from politics. At that time, Zubiri was not yet part of UNA.

“Now with all these developments, I’m waiting for signals that it is time for me to go."

Pimentel Jr stressed that he is grateful to Binay for choosing him to lead the center and for giving him free rein. Still, he is firm about his stand on Zubiri.

“What I am worried about is the misapprehension of people that I am not forceful enough in speaking out because I am here. I don’t want that to happen so if it means I have to cut off my connections, I will do so.” – Rappler.com