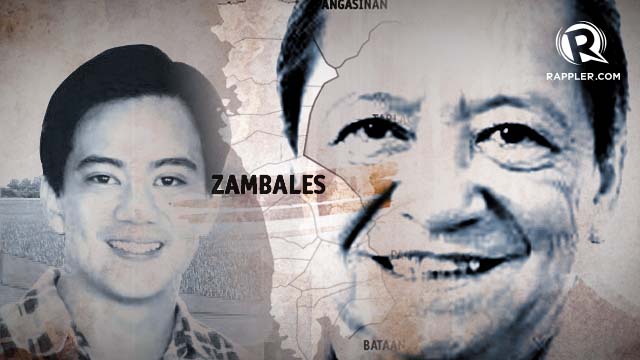 OLONGAPO CITY, Philippines – The actions of former Zambales Governor Vicente Magsaysay, who is not a candidate in the 2013 mid-term elections, may have an impact on the political fates of his relatives running for local and national posts.

During a forum for candidates organized by the Parish Pastoral Council for Responsible Voting (PPCRV) here on Saturday night, May 4, Magsaysay caused a commotion and single-handedly stopped the event when he confronted a priest and almost hit him.

Magsaysay got mad when the priest cut off the microphone of his grandson, Jobo Magsaysay, for making remarks against one of the candidates on stage.

Running for representative of the first district of Zambales, Jobo slammed Olongapo Mayor James Gordon Jr. for the alleged debts owed by the city government after President Benigno Aquino III approved the privatization of the city’s power distribution infrastructure.

A fight among supporters of the candidates almost broke out when the elder Magsaysay rushed to Fr. John Mara and berated him.

As the elder Magsaysay’s bodyguards and PPCRV members attempted to stop the squabble, Magsaysay threw his fist at Mara and almost hit him.

When the tension died down, the PPCRV just stopped the event, called for calm and delivered a prayer.

Prior to this, supporters of both Magsaysay and Jeffrey Khonghun, another congressional candidate, loudly booed Mayor Gordon and his wife, Anne Marie, who is seeking to replace him in the post.

The supporters of Khonghun and Magsaysay even staged a walkout when it was the Gordons’ time to speak.

PPCRV members told Rappler that all the candidates invited to the event had been told that they could only discuss their platforms, and were not allowed to engage in character assassination.

“When I approached Jobo, he was okay. He understood that this was our rule,” Mara told Rappler.

The priest pointed out that earlier in the program, even the microphone of Brian Gordon was cut off, but no untoward incident happened. Brian, who is running of Olongapo vice mayor, is the son of UNA senatorial candidate Richard Gordon and nephew of the Mayor.

Asked for comment on Magsaysay’s actions, Mara declined to give a statement.

Other priests, however, condemned the incident, saying that violence had no place in the elections, and the forum was organized so that voters could make informed decisions.

Another priest who looked shaken by the incident told Rappler that they had asked members of the PPCRV to guard Mara.

“There should be someone with him at all times starting now,” the priest said.

Some of those who attended were dismayed by the arrogance shown by the Magsaysays.

Desiree Basco, a resident of Olongapo, said “in 2010, Vicente ran for Olongapo mayor, and he lost because we don’t want violence here. He’s a bully, and that’s widely known in Zambales. By assaulting Father Mara, he’s just proven that we were right not to support him or his family.”

“Magsaysay should not have done that. Doesn’t he have any decency left? How can you vote for any Magsaysay now knowing that this [person] is behind them?” said Rene Tuazon, another resident.

The former 3-term governor of Zambales was the one who fielded his daughter-in-law Mitos in the senatorial race.

The elder Magsaysay himself ran for the Senate in 2007, under former President Gloria Arroyo’s Team Unity. He lost. – Rappler.com